On or about April 1, 1793, the Department of State moved from the building at 307 Market Street to a building which was apparently larger.1 According to a 1793 Philadelphia city directory, the new home of the Department was located at 287 Market Street2 on the north side of the street between Seventh and Eighth Streets (now 719 Market Street).3 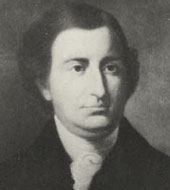 The entire frontage from Seventh to Eighth Street on the north side of Market Street is now occupied by the Lit Brothers department store, of late nineteenth-century construction.8

The Department was in this building until May 1794 except for a time in September-October 1793 when it ceased to function because of a severe yellow fever epidemic in Philadelphia. On September 12 Jefferson wrote: "The fever spreads faster... all my clerks have left me but one: so that I cannot go on with business." 9 A few days later, he set out for Monticello. Jefferson completed his tenure of office as Secretary of State on December 31, 1793, while the Department was in the building at 287 Market Street. Edmund Randolph succeeded to the office on January 2, 1794, in the same building.