On or shortly before April 1, 1816, the Department of State moved from its temporary quarters in the house on G Street to the rebuilt public building west of the White House. As before the British invasion, the Department shared this building with the War and Navy Departments. 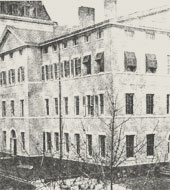 Congress had provided, on February 13, 1815, "That the President of the United States cause to be repaired or rebuilt forthwith, the President's House, Capitol and public offices, on their present sites in the city of Washington,"1 Within fourteen months, the reconstruction of the public building to the west of the White House was completed and ready for occupancy at a cost of not quite $32,000.2 The Daily National Intelligencer of April 2, 1816, offered the following comment: "The Public Offices. —It is very satisfactory to perceive that the Public Buildings, occupied by the different Offices, are already repaired, we might almost say rebuilt, so as to be in a condition much superior to that in which they were before their conflagration by the torch of our late enemy. The Department of State is already moved into the East end of the second story of the building west of the President's house; where it has very capacious and excellent apartments, being very much better accommodated as to room and arrangement than heretofore."

Work on the building had involved fairly extensive patching of the existing outer brick walls and the rebuilding of the roof and the interior. The architect was James Hoban, who had been awarded first prize for his design of the White House, who had designed and built the Blodget Hotel, and who was currently supervising the rebuilding of the White House.3 Josias Thompson was the contractor, and the bricklaying work was contracted by Peter Mortie.4

The rebuilt building was the same size as the original and evidently very similar to it in design both inside and outside. It was two stories high, with a basement and an attic with entrances on each of its four sides. On both stories a corridor ran the length of the building, with fourteen rooms on each side of each corridor. In the center of the building, on the north side of the corridor, was a wide staircase.5 Apparently there were twenty-eight fireplaces, the hearths of which, in the rooms for the Secretaries, were of stone, and in the other rooms "of stock Brick neatly laid in mortar."6 At the time the Department of State occupied the building, the roof was of shingle, which was subsequently replaced with slate,7 and the rooms were whitewashed.8 A new desk and bookcase were purchased for the Secretary's room for $90 on March 19, 1817.9

The Department of State, by the end of 1817, occupied five rooms on the second floor at the south and east end of the building and four rooms in the attic, while the Patent Office (still a part of the Department) occupied two rooms in the General and City Post Office Building (Blodget Hotel building). According to a report by John Quincy Adams, who had succeeded Monroe as Secretary of State on September 22, 1817,10 this space was wholly inadequate to the needs of the Department,11 even though the total personnel, including messengers, and assistants still numbered only about a dozen persons.

Secretary Adams also complained about the amount of work he had to do in the Department of State. In a letter to a friend dated June 22, 1818, he wrote: "It was considered by Mr. Madison that the public duties of the Department of State were more than sufficient for one man.... For myself I can only assure you that I have found the duties of the Department to be more than I can perform. Some of them therefore are not performed."12 "All is disorder and confusion," he lamented.13

Consequently, Adams took steps to [Page 36] improve the work of the Department. By an executive order in 1818, the duties and salaries of a number of the clerks were specifically stated.14 Among other things, he also set up an improved system for filing and registering diplomatic and consular correspondence put in order15; the Department's accounts;16 and improved the system of recording the laws and resolutions of Congress, which was then a function of the Department of state.17

Although the Department of State moved out of the public building west of the White House in 1819, that building continued to house the Navy Department for nearly sixty-five years thereafter. Pursuant to a joint resolution of Congress approved December 15, 1864,18 it was enlarged by the addition of a third story and an extension or wing on the south side.19 The building was razed between February 18 and March 31, 1884, to make way for the erection of the center and west wings of the State, War, and Navy Building—the present Old Executive Office Building which still stands on that site.20