The Department's need for more space, as reported by John Quincy Adams in December 1817 (see previous chapter), was not unique in the administration. In his annual message to the Congress on December 2, 1817, President Monroe indicated that the public buildings in Washington had become "altogether insufficient for the accommodation of the several Executive Departments."1 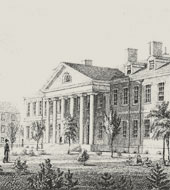 Congress agreed that there was a need for more space and recommended that two additional public buildings be erected similar in structure to those east and west of the White House.2 An act was approved April 20, 1818, which provided for the erection of "two buildings, suitable for offices of the executive departments, to be placed north of the buildings at present occupied by those departments, and in a line parallel therewith; each of said new buildings to contain forty rooms of convenient size." 3

Construction of the two buildings was completed in 1819 at a total cost of $191,756.71.4 The designer and contractor was James Hoban.5

The two new buildings were located east and west of the White House and north of the two older executive office buildings. The east building, which became known as the Northeast Executive wing of the Treasury Department Building, stood where the north Building now stands. It became the home of the Department of State. The west building, known as the Northwest Executive Building, was located where the north wing of the Old Executive Office Building (Old State Department Building) is now. It was the home of the War Department.

The new buildings, each 157 by 57 feet, were two stories, plus basement and attic, with dormer windows in the attic. There was an entrance on each of the four sides of the buildings. The floor plans of the two buildings were identical. A corridor ran the length of each floor, with rooms on either side, sixteen on the first floor and fifteen— one of them about triple-sized, however—on the second floor. The triple-sized room, which was designed as a library, was in the center front, extending the length of the portico, and had five windows. In the center of each building, on the south side of the corridor, was a wide staircase.6 By the early 1830s, the exteriors of all four executive office buildings were painted a leaden-gray color with white trim.7

A description of the two buildings as they appeared in 1830 follows (the dimensions here given are not exact):

"At the distance of about 200 yards, on the east of the President's house, are situated two buildings for the departments of State and of the Treasury; and at the same distance on the West, are two others for the War and Navy departments. These buildings are all of the same dimensions and construction; they are 160 feet long and 55 feet wide, of brick, two stories in height; they are divided in their length by a broad passage, with rooms on each side and a spacious staircase in the centre. The two most northerly buildings are ornamented with an Ionic portico of six columns and pediment; and every observer must be convinced that the two other buildings require some such finish on their south fronts, to make them complete. —The grounds about these offices have been graduated and planted, of late years; and the shrubbery begins to present a pleasing appearance."8 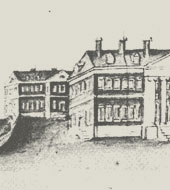 The Southwest Executive Building (above), home of the Department from April 1816 to August 1819, stood to the right and rear of the White House.

The Department of State—not including the Patent Office, which remained in the Post Office Building— moved into the new Northeast Executive Building from the building on Seventeenth Street west of the White House (Southwest Executive Building) sometime between August 21 and September 11, 1819.9 It occupied eleven rooms on the second floor and six on the attic floor.10 The large library probably counted as two rooms, because, according to a publication of 1820, the Department then occupied ten rooms on the second floor, including the library, while the Fifth Auditor of the Treasury and his staff occupied the other five rooms on that floor11

John Quincy Adams was Secretary of State at the time of the move. His staff consisted of the Chief Clerk, nine clerks, one messenger, and one assistant messenger, besides the Superintendent, one clerk, and one messenger in the Patent Office.13

The Department grew steadily, but without benefit of an organizational pattern until 1833 when, under Secretary Louis McLane, it was organized for the first time into bureaus. Now functions and responsibilities were more specifically designated. This organization was subsequently modified, but remained basically the same until 1870. By 1846 the Department of State, together with the Fifth Auditor of the Treasury, occupied most of the rooms in the Northeast Executive Building and still needed more space. According to Secretary John C. Calhoun, writing in 1845, the number of "regular" clerks had increased from 10 in 1818 to 14 in 1845 with eight "extra" clerks appropriated for by single acts or joint resolutions of Congress.14

The following memorandum to Secretary of State James Buchanan, unsigned and undated but evidently written by Edward Stubbs, Disbursing Agent of the Department, about February 12-14, 1846, shows something of the disposition of the offices of the Department throughout the building at that time:

"In the Department of State on the 2nd floor there are 15 rooms, two of them small, and one large. Of these two are occupied by the Secretary,

One as an ante-room

One, by the Chief Clerk

Three, by the 4 clerks of the Diplomatic Bureau

Two, including the longroom for the Library & Libn

One, for the Bureau of Archives & Laws

One, for the Translator

Two, for the two clerks of the Consular Bureau

One, for the Disbursing Agent, and,

One, a small one, for two Clerks, one, assisting in Diplomatic Bureau; and one, keeper of Mail Registers & issuing Pardons, and passports. The latter has charge of the great seal. The sealing, for want of other room, has to be done in the passage.

"On the lower floor there are 16 rooms two of them small.

"Of these The Fifth Auditor, being Auditor for all accounts connected with the Department of State, has 6 rooms...

"The Second Comptroller has, for a part of his Office, 3 rooms...

"For Watchmen & laborers of the Buildg 1 room...

"For safe keeping the enrolled laws, Manuscript archives, evidences of claims on foreign governments, Archives of Conventions to adjust claims. Returns of Sixth Census 2 rooms. These are also occupied by Clerks employed by the Department, by Clarke & Force copying for their [Page 39] Documentary History, and, by clerks copying for the new edition of the laws.

"1 room is occupied by the packer and distributor of laws & Congressional documents,

"1 room for the reception & packing of the laws and documents, and,

"1 room as a bindery and receptacle of laws and documents.

"The attic story (a half story) contains 9 rooms with dormer windows. These are used for the reception of various printed documents, laws &c . besides the Newspapers, bound and unbound; including one occupied as a store room by the Comptroller. They are not habitable by Clerks; neither is it considered safe to have fires in them.

"The Department needs the rooms occupied by the Comptroller. One on the lower floor for an addition to the Copy right room, now insufficient to contain the books deposited, and those which will, under the law, continue to be deposited

"One for the reception and arrangement of Manuscript archives & c for which there is at present no room; and one, for one of the two clerks at present in one of the small rooms on the 2nd Story. All three to be occasionally occupied by such temporary clerks as may be required to transact extraordinary business."15

It should be noted that, by an act of July 4, 1836, the Patent Office had been changed to the Commissioner of Patents and recognized as a separate portion of the Department, responsible to the Secretary.16 This function was moved entirely from the Department's jurisdiction when it was incorporated in the Department of Interior upon that Department's formation in 1849.17

The old accounts records of the Department of State reveal many details regarding the Northeast Executive Building through the years. For example, there is mentioned instances of painting the exterior and interior from time to time, and papering certain rooms on occasion. Heat was supplied by numerous fireplaces, supplemented by iron stoves. Illumination was by means of candles and spermoil lamps until about the middle of 1852, when the Washington Gas Light Company began supplying gas to the building. The Department's rooms were carpeted, at least during the winter months, and at times the corridors were carpeted also. Sometime around April 1863, a tin-roofed passageway had been erected to connect this building with the then unfinished Treasury Department Building.18

Frederick W. Seward gives the following description of the building as it appeared when he entered upon his duties as Assistant Secretary of State in March 1861:

"It was substantial and convenient, without being either stately or imposing. Its exterior was painted a plain drab color, and exhibited little attempt at ornamentation, excepting a portico of six white columns on the northern side. Under this portico was the main entrance, which, however, was little used—a side door on Fifteenth street offering a more convenient way of ingress and egress. Within, its finish was equally simple. It had but thirty or forty rooms, not large, though well arranged for their purpose; and these, during the preceding half century, had been found ample for the needs of this branch of the Government; though the accumulation of books and archives was now beginning to cramp the space of some of the clerks. The two rooms in the north-east corner of the second floor were usually occupied by the Secretary—one for study, the other for receiving visitors. Messengers were just outside his door; and across the hall, within convenient reach, were the rooms of the Assistant Secretary and Chief Clerk."19 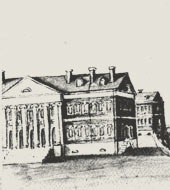 The Northeast Executive Building (above), home of the Department from 1819 to 1866, stood to the left and in front of the White House.
The Department of State occupied the Northeast Executive Building for 47 years, including those of the Civil War, from the late summer of 1819 until November 1866. From this location sixteen Secretaries of State guided the expanding U.S. foreign relations.

Bу 1866 the Department probably occupied the entire Northeast Executive Building, for the records indicate that by November 1863 the Department had overflowed into two or three rooms in the Treasury Department Building.20 Also, in November 1866, Secretary William H. Seward had a staff of forty-six, including thirteen extra or temporary clerks but exclusive of laborers and watchmen.21

The story is told that after the Northeast Executive Building was torn down, one of the officers presented to Secretary Seward a cane of plain dark wood and stated:

"That stick, Mr. Secretary, has been in the hands of every President of the United States, of every Secretary of State and every cabinet officer. It has been handled by every foreign minister accredited to the government or commissioned by it. It has been touched by nearly every senator and by the majority of all the representatives in Congress, to say nothing of thousands of civil, military, and naval officers and private citizens."

When Seward expressed his incredulity, the clerk explained that it had been carved out of the handrail of the old stairway leading to the Secretary's office.22