The Second Continental Congress convened in Philadelphia on May 10, 1775. This time it met in the Pennsylvania State House, or Independence Hall, as it is now called. It was in this building that the Declaration of Independence was signed. 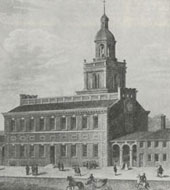 Pennsylvania State House
The Committee of Secret Correspondence met here from its establishment in 1775 until it was replaced by the Committee for Foreign Affairs on April 17, 1777, except for the brief time that Congress was in Baltimore. It was here, too, that the first diplomatic representative to the American Colonies, Conrad Alexandre Gérard of France presented his letter of credence to Congress on August 6, 1778. The State House had been built for the provincial government, which for a half century previously had had no official building. Construction on the building began in 1732, and although the Assembly had met in the building as early as 1735, it was not completed until 1748. When completed, the building had a facade 107 feet in length connected by closed arcades, or piazzas, to wing buildings some 50 feet long. The following is a description of the building:

"The main building had a decked gable roof, balustraded between the chimneys and surmounted by a centrally located cupola.... The first floor contained two chambers about 40 feet square, separated by a spacious center hall about 20 feet wide.... The State House was not elegantly furnished. Chairs, tables, curtains, screens, and other items purchased for the building were never unduly expensive .... The building appears to have been heated originally by open fireplaces for which stoves were later substituted."13

In 1750 the Assembly directed that a tower be erected to contain a staircase and belfry. By 1753 the tower was completed and the State House bell (now called the Liberty Bell) was hung. This was the bell that was rung to announce the adoption of the Declaration of Independence on July 8, 1776.

There have been various alterations of the State House through the years. When the British occupied Philadelphia in 1777-1778, they damaged the State House by converting the first floor into a barracks and making the second floor into a hospital for wounded American prisoners. The old steeple had rotted and become so weak that it was taken down in 1781. A new one was built in 1828. Congress Hall was begun in 1787 and finished in 1789. The City Hall building was begun in 1789 and finished in 1791. These two halls formed part of the complex of which the State House was a part. From 1802 until 1828 Charles Wilson Peale used the Assembly Room and second floor of the State House for a museum and portrait gallery.

Beginning in 1828, there have been a series of restorations, continuing even at the present time. Since 1898 the State House has been a public shrine in Independence National Historical Park.