In mid-December 1776 Congress decided to move to Baltimore to escape capture by the advancing British.14 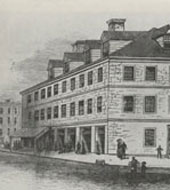 The old Court House was offered to the Congress as a meeting place, but according to the diary of John Adams, it chose to meet "in the last house at the west end of Market Street, on the south side of the street; long chamber with two fireplaces, two large closets and two doors."15

The house belonged to Henry Fite, who rented it to the Congress for three months for 60 pounds. It was described as follows:

"'Congress Hall,' as it was afterwards called, was a spacious three-story and dormered attic brick building-10 windows long, with 3 doors, and 5 windows deep with a center door on the short side. It stood on the corner of Liberty and Baltimore Street, as Market Street is now named... 'Congress Hall' was destroyed by fire on September 4, 1860, but a bronze tablet marks the approximate site of the building."16

The time in Baltimore was a trying one for the Congress. There were complaints that "the town was exceedingly expensive, and exceedingly dirty, that at times members could make their way to the assembly hall only on horseback, through deep mud."17Throughout the session there was inadequate representation from the various colonies. However, it is worth noting that Samuel Adams had declared in the earlier part of the session, "We have done more important business in three weeks than we had done, and I believe should have done, at Philadelphia, in six months."18The appointment of a committee of five to prepare a plan for obtaining foreign assistance was included in the business of the Congress.

When conditions made it possible to return to Philadelphia, Congress resolved, on February 27, 1777, "that when Congress adjourns this evening, it be adjourned to meet at [Page 3] [Page 4] Philadelphia, on Wednesday next."19 On March 4, 1777, Congress met again in Philadelphia at the State House.