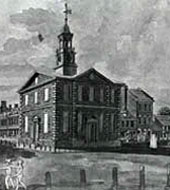 Congress held only one session in Lancaster, on September 27, 1777, in the Court House.23 The record of this session indicates that all of the business conducted on that day in Lancaster related to military matters.24 At the end of the day, Congress resolved to adjourn to York, across the Susquehanna River, "there to meet on Tuesday next, at 10 o'clock."25

The Lancaster Court House was built in 1739. Perhaps the best description of the building was recorded by William Marshe in 1744:

"It is a pretty large brick building two stories high. The ground room... is very spacious...

"Fronting the justices' bench, and on each side of it, are several long steps or stairs.... This Court House is capable to contain above 800 persons without incommoding each other.

"When we had surveyed this room we went up stairs into one overhead. This is a good room, and has a large chimney... Adjoining to this room, is a smaller one...

"On the top of the Court House is a kind of cupola. We ascended a ladder and got into it. From hence we had a complete view of the whole town, and the country several miles round, and likewise of part of the Susquehanna river at twelve miles distance."26