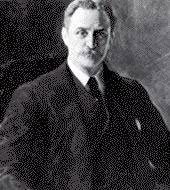 Bacon was born in Jamaica Plain, Massachusetts in 1860 to a prominent merchant family. He attended Harvard, where he befriended future president Theodore Roosevelt. Bacon graduated in 1880 and went on to travel the world for one year before returning to Boston to begin a successful career in business. He took part in negotiations that formed major companies, including the Northern Securities Company and the United States Steel Corporation.

Bacon’s business savvy aided his diplomatic efforts as he worked diligently to ratify treaties between Colombia, Panama and the United States regarding the Panama Canal. Bacon’s appointment as Secretary of State for the remainder of Roosevelt’s term was mostly due to his friendship with the President. However, he used that month wisely, successfully passing the treaties through the Senate.

Bacon also convened an environmental conference between the North American states, to discuss conservation of natural resources on the continent. Bacon’s diplomatic skill was recognized by his successor, Secretary of State Philander Knox, who appointed Bacon as Ambassador to France.

Years later, Bacon served under General Pershing during World War One. His military service at an advanced age put a general strain on Bacon’s health, and he died in 1919, shortly after returning to the United States.