Biographies of the Secretaries of State: James Addison Baker III (1930–)

James A. Baker was appointed Secretary of State on January 22, 1989, and served until August 23, 1992. Baker brought almost two decades of experience in politics, both behind the scenes and in key administration positions with him to the State Department. As Secretary of State, Baker successfully oversaw United States foreign policy during the end of the Cold War, as well as during the First Persian Gulf War. 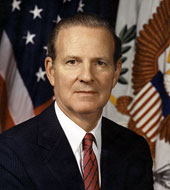 Born in Texas on April 28, 1930, Baker attended prep school in Pennsylvania, and went on to graduate from Princeton University in 1952. Following a two-year active rotation in the United States Marine Corps from 1952 to 1954, Baker received his law degree from the University of Texas at Austin in 1957. He practiced law at the firm of Andrews and Kurth from 1957 to 1975, but it was not until the early 1970s that he became involved in politics.

Through the influence of his first wife, Baker became involved in the Republican Party and began a long political relationship with George H.W. Bush. Baker chaired Bush’s unsuccessful Senate campaign in 1970. In 1971 Baker became the Finance Chairman of the Republican Party and played a significant regional role in President Nixon’s reelection. During the Ford Administration he was appointed Under Secretary of Commerce.

During the second Reagan Administration, Baker simultaneously served as Secretary of the Treasury and as Chairman of the President’s Economic Council. Baker served as Secretary of State in George H.W. Bush’s cabinet from January 22, 1989 until August 23, 1992, when he was appointed Senior Counselor and White House Chief of Staff for President Bush. Baker continues to be active in politics and U.S. foreign policy.

As Treasury Secretary during the second Reagan Administration, Baker was instrumental in passing the Plaza Accord of September 1985, a multilateral agreement, which devalued the dollar in order to reduce America’s account deficit and help the U.S. economy recover from a recession that had begun in the early 1980s. He also tried to implement the Baker Plan, which proposed using Japan’s trade surplus to relieve Third World debt.

Baker served as Secretary of State during a very interesting and important time period in U.S. foreign relations. He was influential in overseeing American foreign policy during the tumultuous and touchy times following communism’s downfall in Eastern Europe and the break-up of the former Soviet Union.

As the head of the State Department, Baker was also the driving force behind creating a coalition of nations to repel Saddam Hussein and Iraq from Kuwait during the First Persian Gulf War.

Baker continues to play a role in U.S. diplomacy and international affairs. He served as a Personal Envoy of the United Nations Secretary-General for Western Sahara from 1997 to 2004. In 2006, the former Secretary of State served as the Republican co-chair of the Iraq Study Group, tasked with assessing America’s policy toward Iraq.