Biographies of the Secretaries of State: William Jennings Bryan (1860–1925)

President Woodrow Wilson appointed William Jennings Bryan Secretary of State on March 5, 1913. He entered into duty the same day and served as Secretary until his resignation on June 9, 1915. 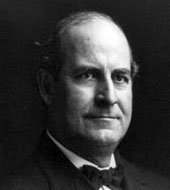 Bryan won election to the U.S. House of Representatives in 1890 and served until 1895, championing Populist causes such as the free coinage of silver, national income tax, and direct election of Senators. After mounting an unsuccessful bid for the U.S. Senate in 1894, Bryan returned to Nebraska and edited the Omaha World-Herald. Although not a declared candidate for the 1896 presidential race, Bryan secured the Democratic nomination following the delivery of his “Cross of Gold” speech but lost the election to Republican candidate William McKinley.

The Democratic Party nominated Bryan again as its candidate for President in 1900 and 1908, although he lost both elections. President Woodrow Wilson selected Bryan, one of the elder statesmen of the Democratic Party, as his Secretary of State following the 1912 presidential election.

Bryan’s major accomplishment as Secretary was his negotiation of peace treaties that pledged the 30 signatories to refrain from hostilities during arbitration of disputes. He also negotiated the Bryan–Chamorro Treaty in 1914 (ratified by the Senate in 1916), which permitted the United States the latitude to construct an isthmian canal across Nicaragua and secured rights to build naval bases at the Gulf of Fonseca and on the Corn Islands.

Bryan’s position on the rights of neutrals during wartime placed him at odds with President Wilson. Declaring U.S. neutrality following the outbreak of World War I in August 1914, Wilson adhered to traditional concepts governing the recognition of blockades, neutral transport of contraband goods, and travel of civilians to belligerent nations on combatant ships. Bryan asserted that technological innovations such as submarines had altered the nature of international law and made it impossible to protect U.S. citizens traveling into a war zone, and he attempted to persuade Wilson to prohibit such travel.

The German practice of unrestricted submarine warfare, which Wilson perceived as a violation of the rights of neutrals, resulted in the sinking of the British passenger liner Lusitania in May 1915 and the deaths of 128 U.S. citizens. Wilson responded by sending the German Government a strongly worded protest note affirming the right of neutrals to transit on the high seas. Bryan insisted that Wilson send a similar protest to Britain for its violations of neutral rights, an act the president rejected. Wilson’s dispatch of a second note demanding an end to German submarine warfare prompted Bryan to resign on June 9, 1915.

Following his resignation, Bryan continued to write and lecture and opposed Clarence Darrow as counsel in the Scopes trial. Bryan died on July 26, 1925.