Biographies of the Secretaries of State: James Buchanan (1791–1868)

James Buchanan was appointed Secretary of State by President James K. Polk on March 6, 1845. Buchanan entered duty on March 10, 1845, and left the position on March 7, 1849. After an unsuccessful bid for the Democratic presidential nomination in 1852, Buchanan secured the nomination in 1856 and was elected President. He served one term, from 1857 to 1861. 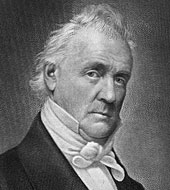 Buchanan was born to Irish immigrant parents near Mercersburg, Pennsylvania. He entered Dickinson College at the age of 16 and graduated in 1809.

Following graduation, Buchanan began a clerkship with John Hopkins, a reputable lawyer in Lancaster. After a failed attempt to begin his practice in Kentucky, he returned to Pennsylvania where he was admitted to the bar in 1812.

Two years later, after marching in a military company against the British in the War of 1812, Buchanan entered politics when he was nominated to the State Assembly. Following a second term in the lower house of the Pennsylvania legislature, Buchanan was elected to the U.S. House of Representatives in 1820. He served in this position for ten years.

In 1832, President Andrew Jackson made Buchanan Minister Plenipotentiary to Russia. After returning from two years in St. Petersburg, he was elected to the U.S. Senate in 1834 and served for three terms. Buchanan had presidential aspirations during his Senate service and was even considered for the Democratic nomination for the 1844 election. The nomination instead went to James K. Polk and in return for Pennsylvania’s support, Polk appointed Buchanan as Secretary of State.

Both President Polk and Secretary Buchanan believed in Manifest Destiny and were strong proponents of U.S. westward expansion.

In addition to supporting U.S. efforts to annex Texas, Buchanan was charged with negotiating a settlement on the boundary dispute with Great Britain over the Oregon Territory. Like the 1848 treaty with Mexico that would soon follow, the 1846 Oregon Treaty fell short of a full territorial concession.

Outgoing President Tyler successfully pushed for the Annexation of Texas by a congressional joint resolution just before leaving office, an effort supported by Buchanan. Annexation prompted the Mexican-American War and resulted in the 1848 Treaty of Guadalupe Hidalgo. The treaty brought the United States significant territorial expansion, yet Buchanan opposed its outcome and believed that Baja and the northern provinces of Mexico should have been included.

Polk directed most aspects of U.S. foreign policy during his presidency, allowing Buchanan little control. Buchanan felt this lack of power intensely and communicated his discontent to close friends and associates. Nevertheless, he served as Secretary of State until the end of the Polk Administration.

After serving as Secretary of State, Buchanan attempted to win the Presidency in 1852 but failed. Instead, he served as Minister to Great Britain from 1853 to 1856, where he drafted the Ostend Manifesto with other U.S. diplomats. His absence during the sectional schism of the Democratic Party allowed him to win that party’s nomination and subsequently the Presidency in 1856.