Biographies of the Secretaries of State: James Francis Byrnes (1882–1972)

James Francis Byrnes was appointed Secretary of State by President Harry S. Truman on July 3, 1945, and entered duty on the same day. He left office on January 21, 1947. Byrnes led the Department of State during the significant transition from World War II to the Cold War. 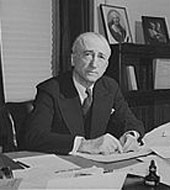 Byrnes was born in Charleston, South Carolina to an industrious mother who was widowed shortly before his birth. He left school after the seventh grade to work in a law office where he received excellent tutelage from several judges. Byrnes was admitted to the South Carolina bar in 1903 and practiced in Aiken. In 1908 he was elected to his first public office as district prosecuting attorney. Two years later he was elected to the U.S. Congress, where he served from 1911 to 1925.

Byrnes returned briefly to private practice before his election to the U.S. Senate in 1931. During his ten years in the Senate, he championed President Franklin D. Roosevelt’s New Deal. The President appointed Byrnes to the Supreme Court in 1941. It was a short-lived appointment for the restless judge who missed the political action of the legislative branch. He resigned the following year.

That summer, President Truman asked Byrnes to return to Washington as his Secretary of State. He was unanimously confirmed by the Senate without a hearing.

A skilled policymaker, Byrnes spent much of his time outside of Washington meeting with foreign leaders. President Truman was uncertain of his own aptitude in matters of foreign policy and thus placed a great deal of confidence in Secretary Byrnes.

Within days of his appointment, Byrnes accompanied President Truman to the Potsdam Conference, a critical turning point in U.S.-Soviet relations. He continued to negotiate the rapidly fraying post-war alliance at conferences in London and Moscow.

Byrnes increasingly wielded less control over U.S. foreign policy as disagreements arose with President Truman over how forceful the country should be against the increasingly uncooperative Soviet Union.

The Secretary was a proponent of using the newly-developed atomic bomb against Japan, and under his advice, two atomic bombs were detonated over Japan in August of 1945. It was also during Byrnes’ tenure as Secretary of State that George Kennan authored his famous 1946 “Long Telegram,” advocating a change in policy towards the Soviets. President Truman and Secretary Byrnes implemented these changes swiftly, laying the foundations for the early Cold War.

Byrnes resigned his position on January 21, 1947, and continued to practice law. In 1951 he was elected Governor of South Carolina and served one term. James Byrnes died in 1972.