Biographies of the Secretaries of State: John Caldwell Calhoun (1782–1850)

John Caldwell Calhoun was appointed Secretary of State by President John Tyler on March 6, 1844. Calhoun entered duty on April 1, 1844, and left the position on March 10, 1845. A former U.S. Representative, U.S. Senator, Secretary of War and Vice President, Calhoun served as Secretary of State for less than one year before returning to his position in the U.S. Senate, where he served until his death in 1850. 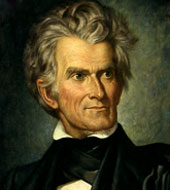 Calhoun was born in Abbeville County, South Carolina to a prosperous farming family. He entered Yale College in 1802 and graduated two years later. He continued his education at Litchfield Law School in Connecticut. He gained admission to the South Carolina bar in 1807 and practiced law in his native Abbeville. The following year, he was elected to the state legislature of South Carolina, where he served for two years preceding his election to the U.S. House of Representatives in 1810.

President Monroe appointed Calhoun as Secretary of War in 1817, and during his tenure he made substantial changes to the War Department. He served two terms as Vice President: in 1825 under John Quincy Adams and again in 1829 under Andrew Jackson. He resigned the position of Vice President in 1832 and returned to South Carolina as a Senator, a position he held for the following 11 years. In 1844, following the accidental death of Secretary Abel P. Upshur, President Tyler appointed Calhoun as Secretary of State.

Calhoun entered office as Secretary of State not at the behest of President Tyler, but of Henry Wise, a mutual associate who had all but promised him the position. Tyler accepted the proposition and named Calhoun to his Cabinet with the assurance that its newest member would carry out the directives of his predecessor, namely the Annexation of Texas.

One of Calhoun’s first acts as Secretary of State was to submit a treaty of annexation to the Senate. The 1844 treaty had been largely crafted by President Tyler and the former Secretary Upshur, but it was Calhoun’s vociferous and controversial support of slavery in Texas that was blamed for its defeat in Congress. He continued to press for annexation of a pro-slavery Texas, which deeply troubled President Tyler, the incumbent in that year’s election who hoped to downplay sectional differences and unite, rather than divide, the nation over the issue of annexation.

When President Polk was elected on a pro-expansionist platform, sitting President Tyler recommended annexation by a joint resolution of Congress, which passed days before he left office in 1845.

Calhoun also worked to resolve territorial disputes to the north, opening negotiations on a settlement with the British over the Oregon Territory. The U.S. also signed the Treaty of Wangxia, its first commercial treaty with China, during Calhoun’s tenure. President Polk chose not to retain Calhoun as Secretary of State, and the South Carolinian returned to the Senate, where he served until his death five years later.