Biographies of the Secretaries of State: William Maxwell Evarts (1818–1901)

William Evarts was appointed Secretary of State by President Rutherford B. Hayes on March 7, 1877, and began serving as Secretary on March 12. Evarts served until March 7, 1881. 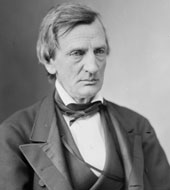 Evarts entered into politics as a Whig and was appointed Assistant District Attorney of the southern district of New York in 1848, a post he held until 1853. Evarts later joined the newly formed Republican Party and was an unsuccessful candidate for the U.S. Senate in 1861.

His work in private practice earned him a reputation as one of the country’s top lawyers. Upon the recommendation of Secretary of State William H. Seward, President Andrew Johnson retained Evarts as his counsel during his impeachment trial. Afterwards, Johnson appointed Evarts as Attorney General on July 16, 1868, a position in which he served until March 4, 1869.

After several years of private practice, Evarts represented the Republican Party before the Hayes-Tilden Commission established to resolve the disputed election of 1876.

President Hayes nominated Evarts to be his Secretary of State on March 7, 1877. Despite opposition in the Senate, including that of James G. Blaine, Evarts’s nomination was approved on March 10, and he began his duties on March 12.

After leaving office, Evarts served as a delegate to the International Monetary Conference in 1881 and as U.S. Senator from New York from 1885 to 1891. Evarts died on February 28, 1901.

As a federal prosecutor, Evarts addressed international issues including investigations of possible filibustering expeditions into Central America. These investigations eventually led to the detention of the ship Cleopatra, which was part of Narciso López’s expedition against Cuba.

During the Civil War, Evarts became involved in the early prosecution of Confederate privateers. He was also dispatched on a mission to convince the British Government to enforce neutrality regulations more strictly in an effort to cut off assistance to the Confederacy. Evarts visited France to advocate for the Union cause and attempted to dissuade the French Government from permitting the construction of Confederate warships. Evarts also served as an arbitrator in the Alabama claims.

When Evarts became Secretary of State, he grappled with the decision of whether or not to recognize the new Mexican government led by Porfirio Díaz. Previously, the United States had followed a policy of recognizing Mexican governments as they came into effective control of Mexico, but Evarts decided to act differently. He placed several conditions on his recognition of the Díaz government, most importantly the right of U.S. troops to cross the Mexican border in pursuit of Indian raiders.

Díaz’s government responded with a condemnation of the demands and moved troops to the border. War seemed possible, particularly since Diaz’s opposition accused him of a potential willingness to bow to U.S. pressure. Under the threat of congressional investigation, Evarts backed down and extended recognition, but did not withdraw the order allowing pursuit across the border until 1880.

Evarts also faced domestic challenges from anti-immigration supporters on the West Coast, who began to make stronger demands that Chinese immigrants be prevented from entering the United States despite the provisions of the 1868 Burlingame-Seward Treaty.

In 1880, Evarts sent a committee to negotiate with the Chinese Government in an effort to secure Chinese endorsement of restrictions on immigration. Chinese officials were unwilling to allow an outright ban, but were willing to agree to limits. Evarts also unsuccessfully attempted to negotiate peace between Chile, Peru and Bolivia during the War of the Pacific.