John Forsyth was appointed Secretary of State by President Andrew Jackson on June 27, 1834. He entered duty on July 1, 1834, and completed his tenure on March 3, 1841, during the administration of President Martin Van Buren. Forsyth faithfully served two Presidents who both held close control over foreign policy. 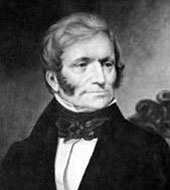 Forsyth was born in Fredericksburg, Virginia and moved to Augusta, Georgia as a boy. He graduated from the College of New Jersey (now Princeton University) in 1799. After studying the law, Forsyth gained admission to the Georgia bar in 1802 and began a legal practice in Augusta. In 1808 he gained an appointment to serve as Georgia’s Attorney General.

Forsyth was elected to the U.S. House of Representatives and served from 1813 to 1818. He next won election to the U.S. Senate, serving from 1818 to 1819. In 1819 President James Monroe appointed Forsyth as U.S. Minister to Spain, an appointment that lasted until 1823. Forsyth returned to the United States and the U.S. House of Representatives in 1823, serving until 1827, when he began two years as Governor of Georgia. In 1829 he returned to the U.S. Senate, where he cemented his reputation as a powerful debater. He served until 1834.

When he became Secretary of State, Forsyth brought with him some prior experience with foreign affairs. As U.S. Minister to Spain, he assisted in securing the ratification of the 1819 Adams-Onís Treaty, which ceded Spain’s claim to East and West Florida. His open criticism of the Spanish Government, however, earned him an official rebuke.

While a U.S. Congressmen, Forsyth was a leading proponent of Indian removal, the withdrawal of U.S. recognition of tribal sovereignty, and the numerous Indian Treaties. President Jackson appointed Forsyth Secretary of State as a reward for political support and consistently ensured that Forsyth followed his lead on foreign policy. Together, they finally concluded the long-standing controversy over the damages inflicted by France upon U.S. foreign commerce during the Napoleonic Wars.

Forsyth also cautiously coordinated with President Jackson on the U.S. recognition of the independent Republic of Texas in 1837.

Under Van Buren’s presidency, Forsyth supported the President’s decision against annexing Texas. Forsyth also backed Van Buren’s calm approach to the dispute with Great Britain over the U.S.-Canadian border, which was complicated by the aggressive stance of the Maine State Government. Forsyth also issued strong statements denying British claims to the right to search U.S. vessels for slaves off the African coast. Finally, Forsyth labored in vain to diffuse the controversy stirred by the Amistad case of 1839. Ultimately, the Supreme Court held against the Van Buren administration’s position, and the African slaves were returned to Sierra Leone in 1842.