Biographies of the Secretaries of State: Christian Archibald Herter (1895–1966)

Christian A. Herter was appointed Secretary of State on April 22, 1959, and remained in that position until the end of the Dwight D. Eisenhower administration on January 20, 1961. Whether working for the U.S. Government or in the private sector, Herter dedicated much of his adult life to serving his country and shaping its role in world affairs. 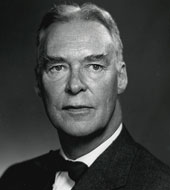 Herter was born in Paris, France, on March 28, 1895, and attended the École Alsatienne from 1901 to 1904, before moving to New York City and graduating from the Browning School in 1911. Upon receiving a bachelor’s degree from Harvard University in 1915, Herter served in the U.S. Embassy in Germany from 1916 to 1917.

He held the position of Secretary of the U.S. Commission to Negotiate Peace (1918-1919) at the Paris Peace Conference following the First World War. After his initial tenure at the Department of State, Herter continued to advance his career in both the public and private arenas. He was the Personal Assistant to Secretary of Commerce Herbert Hoover from 1919 to 1924, during which time he also served as Executive Secretary of the European Relief Council between 1920 and 1921.

He subsequently worked as a newspaper editor and a lecturer at Harvard University. He served in the Massachusetts House of Representatives from 1931 to 1943, where he became Speaker of the House in 1939. Herter then won a seat in the U. S. Congress as a Representative from Massachusetts, where he served until 1953. Following his time in Congress, Herter was elected Governor of Massachusetts in 1953, a position he held until 1957, when he became Under Secretary of State in President Eisenhower’s second administration.

Due to the failing health of Secretary of State John Foster Dulles, Herter was appointed Secretary of State on April 22, 1959, and remained in that position until January 20, 1961. Herter passed away in Washington, D.C., on December 30, 1966.

Herter played an active role in U.S. diplomacy throughout his life, whether he was working for the Department of State or the U.S. House of Representatives. While in Congress, a report that was written in a committee he chaired initiated proposals that led to President Harry Truman’s Marshall Plan, in which the United States gave $13 billion in reconstruction aid to Europe following the Second World War.

Along with scholar George Camp Keiser, Herter founded the Middle East Institute in 1947, and he also served on the board of trustees of the World Peace Foundation. As Under Secretary of State and Secretary of State, Herter helped oversee U.S. diplomacy during the 1958 invasion of Lebanon, the 1958 Taiwan Strait Crisis, and the U-2 incident in 1960.

Herter’s role in the international arena did not end with the Eisenhower administration. He also served as a trade negotiator in the administrations of both John F. Kennedy and Lyndon B. Johnson.