Cordell Hull was appointed Secretary of State by President Franklin D. Roosevelt on March 4, 1933, and served until November 20, 1944. Hull holds the distinction of being the longest-serving U.S. Secretary of State. 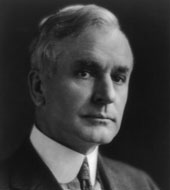 Hull was born on October 2, 1871, near Byrdstown, Tennessee. Although Hull gained admission to the Tennessee bar in 1892 and was appointed a circuit judge in 1903, his great passion was politics.

Following service on his county’s Democratic Party Executive Committee and in the Tennessee State legislature, Hull was elected to the U.S. House of Representatives in 1906. Hull’s career was nearly derailed when he lost his congressional seat during the Republican Party landslide of 1920. Nevertheless, Hull remained at the center of national politics by becoming Chairman of the Democratic National Committee in 1921 and returned to Congress after a two-year absence.

In 1928, Hull sought the Democratic Party’s Vice Presidential nomination. Although his bid was unsuccessful, he did secure the support of the Democratic nominee for the governorship of New York, Franklin Delano Roosevelt.

Four years later, as a U.S. Senator, Hull repaid the favor when Roosevelt sought the Presidential nomination. In return for his backing and in order to firm up his support amongst Southern Democrats, President Roosevelt appointed Hull as his Secretary of State.

As Secretary of State, Hull’s role in U.S. foreign policymaking was greatly circumscribed by President Roosevelt. Hull nonetheless achieved prominence as an advocate of trade liberalization, closer relations with Latin America, and a postwar multinational institution to promote peace and security.

Although President Roosevelt typically represented the United States at the major conferences with Allied leaders during the Second World War, Hull took the lead in attempting to delay war with Japan following its invasion of China. He was also a strong supporter of President Roosevelt’s “Good Neighbor” policy and became the first sitting Secretary of State to attend the International Conference of American States (precursor to the Organization of American States). At the December 1933 meeting in Montevideo, Uruguay, he announced that the U.S. Government would henceforth observe a policy of “non-intervention” in the affairs of its neighbors in the Western Hemisphere.

His greatest contribution to the postwar world came within the realm of international trade. As a firm believer in Woodrow Wilson’s vision of liberal internationalism, Hull believed that free trade promoted international peace and prosperity. He considered high tariff barriers a pressing issue that had contributed to the economic decline leading to the Great Depression and the rise of fascism.

In 1934, Hull helped secure the passage of the Reciprocal Trade Agreements Act (RTAA), which gave the President the authority to personally negotiate bilateral tariff reductions.

Cordell Hull resigned as Secretary for health reasons on November 30, 1944, but served as a delegate to the United Nations Conference in San Francisco in 1945. He died in Washington, D.C., on July 23, 1955.