Biographies of the Secretaries of State: Thomas Jefferson (1743–1826)

Thomas Jefferson served as the first Secretary of State from March 22, 1790, to December 31, 1793. Jefferson brought remarkable talents to a long career guiding U.S. foreign affairs. He successfully balanced the country’s relatively weak geopolitical position and his fear of expansive federal powers with his desire for U.S. territorial and commercial expansion. 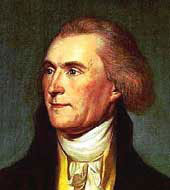 Jefferson was born into the Virginia planter elite. He graduated from the College of William & Mary in 1762, studied law, and was admitted to the Virginia bar in 1767. He was elected to the Virginia House of Burgesses in 1769 and served until the British dissolved the House in 1774. Jefferson was a leading activist in the U.S. independence movement. In 1773, he was a founding member of Virginia's Committee of Correspondence, which disseminated anti-British views, and, in 1774, he published A Summary View of the Rights of British America.

Jefferson was elected as a Delegate to the Second Continental Congress in 1775, and, in 1776 when he was thirty-three years of age, he drafted the Declaration of Independence. During the Revolutionary War, Jefferson returned to Virginia and served as a Delegate (1776-1779) and then as Governor (1779 and 1780). He served as a Delegate to the Confederation Congress from 1783 to 1784 and played a major role in shaping federal land policy. Jefferson joined John Adams and Benjamin Franklin in Paris in 1784 to negotiate commercial treaties with European powers. The following year, he succeeded Franklin as Minister to France (1785-1789) before becoming Secretary of State.

A founder of the Democratic-Republican Party, Jefferson was elected Vice President in 1796 and served two terms as President (1801-1809).

Jefferson made enormous contributions to U.S. diplomacy. While Minister to France, he negotiated a commercial treaty with Prussia (1785) and the Consular Convention with France (1788). As Secretary of State, Jefferson’s approach to foreign affairs was limited by Washington’s preference for neutrality regarding the war between Britain and France. Jefferson favored closer ties to France, who had supported the United States during the Revolutionary War. Tension within Washington’s cabinet—notably with Secretary of the Treasury Alexander Hamilton, who favored an assertive central government—prompted Jefferson’s resignation.

As President, Jefferson’s interest in territorial expansion was satisfied by Napoleon Bonaparte’s 1803 offer to sell the Louisiana Territory for 15 million dollars. The purchase solved the longstanding dispute over navigation rights on the Mississippi River, and doubled the size of the country.

Jefferson waged a foreign war, from 1801 to 1805, when he sent U.S. warships to force the Barbary States to cease harassing U.S. shipping. War between France and Great Britain and those states’ infringement of U.S. neutrality inspired Jefferson to push for the 1807 Embargo Act, which prohibited U.S. shipping. Unfortunately, the embargo crippled the U.S. economy and left the nation ill-prepared for the war with Great Britain that would eventually arrive in 1812.