Biographies of the Secretaries of State: Frank Billings Kellogg (1856–1937)

Frank Billings Kellogg served as Secretary of State during the full term of President Calvin Coolidge from 1925 until 1929, after serving as the U.S. Ambassador to the United Kingdom. He served from March 5, 1925, to March 28, 1929. 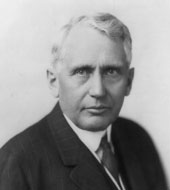 Kellogg began his career as an attorney in his home state of Minnesota, first representing large manufacturing concerns and then, as a trust-busting prosecutor during the administration of Theodore Roosevelt. He became president of the American Bar Association in 1912, and was subsequently elected to the U.S. Senate in 1916. He lost his reelection race in 1922, but was named to a brief appointment as delegate to the Pan American Conference in 1923 and then was appointed Ambassador to the Court of St. James in London.

After his term as Secretary of State concluded, Kellogg was selected to fill the term of another former Secretary of State, Charles Evans Hughes, on the Permanent Court of International Justice at The Hague. Kellogg retired from this position in 1936 because of declining health. He died in Minnesota in December of 1937.

Even before he became Secretary of State, Kellogg had great influence. As Ambassador to the United Kingdom, he influenced U.S. foreign policy, especially regarding the issue of German reparations to the Allies, as outlined in the Treaty of Versailles. Kellogg was one of several important negotiators of the 1924 Dawes Plan, a serious attempt to modify the burden of German reparations payments to France, Belgium, and the United Kingdom.

Once Secretary, he took part in the unsuccessful follow-up to the 1921 Washington Naval Conference, the Geneva Conference of 1927. He also encountered anti-Americanism at the Western Hemisphere conference in 1928. However, he was successful in negotiating a settlement between Chile and Peru regarding the Tacna-Arica border dispute and negotiating a treaty of arbitration with the Republic of Mexico. He also negotiated or signed nearly 80 other treaties with European and Western Hemisphere states, breaking the record set by William Jennings Bryan.

Kellogg’s most lasting achievement, for which he received the Nobel Peace Prize in 1929, was the negotiation of the Kellogg-Briand Pact. This multilateral pact negotiated between 1927 and 1928 with Aristide Briand, the French Foreign Minister, began as a French proposal for a mutual security pact and evolved into a treaty renouncing war as an instrument of national policy. It was ratified overwhelmingly by the U.S. Senate in 1929, despite criticism that it could never be an effective deterrent to war.