Biographies of the Secretaries of State: John Forbes Kerry (1943–)

On February 1, 2013, John Forbes Kerry was sworn in as the 68th Secretary of State of the United States, becoming the first sitting Senate Foreign Relations Committee Chairman to become Secretary in over a century. 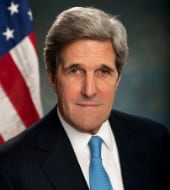 Secretary Kerry joined the State Department after 28 years in the United States Senate, the last four as Chairman of the Senate Foreign Relations Committee.

Secretary Kerry was born on December 11, 1943, at Fitzsimons Army Hospital in Aurora, Colorado, one of four children of the late Rosemary Forbes Kerry and Richard Kerry, a Foreign Service Officer.

Shortly before he graduated from Yale University, Secretary Kerry enlisted to serve in the United States Navy, and went on to serve two tours of duty. He served in combat as a Swift Boat skipper patrolling the rivers of the Mekong Delta, returning home from Vietnam with a Silver Star, a Bronze Star with Combat V, and three Purple Hearts.

Back in the United States, Secretary Kerry began to forcefully speak out against the Vietnam War. Testifying at the invitation of Chairman J. William Fulbright before the Senate Foreign Relations Committee, he asked the poignant question, "How do you ask a man to be the last man to die for a mistake?" He also began a lifelong fight for his fellow veterans as a co-founder of the Vietnam Veterans of America, and later as a United States Senator who fought to secure veterans’ benefits, extension of the G.I. Bill for Higher Education, and improved treatment for PTSD (post-traumatic stress disorder).

In 1976, Secretary Kerry received his law degree from Boston College Law School and went to work as a top prosecutor in Middlesex County, Massachusetts, where he took on organized crime, fought for victims’ rights, and created programs for rape counseling. He was elected Lieutenant Governor of Massachusetts in 1982, and 2 years later, he was elected to the United States Senate where he served for 28 years.

In 2009, Secretary Kerry became Chairman of the Senate Foreign Relations Committee, assuming a leadership role on key foreign policy and national security issues facing the United States, including Afghanistan and Pakistan, nuclear nonproliferation, and global climate change. His service as Chairman built on his previous Senate work that included helping to expose the Iran-Contra scandal and leadership on global AIDS.

As Chairman of the Senate Select Committee on POW/MIA Affairs, he worked to learn the truth about American soldiers missing in Vietnam and to normalize relations with that country.

In 2010, as Chairman of the Foreign Relations Committee, Secretary Kerry was instrumental in the ratification of the New START (Strategic Arms Reduction Treaty) Treaty, a vital nuclear arms reduction agreement with Russia that helps steer both countries away from dangerous nuclear confrontations.

In his 28 years on the Senate Foreign Relations Committee, Secretary Kerry chaired the Asia and Middle East subcommittees where he authored and passed major legislation on international drug trafficking, international money laundering, humanitarian aid, and climate change, and he helped negotiate the UN’s genocide tribunal to prosecute war crimes in Cambodia.

He also held senior positions on the Finance, Commerce, and Small Business committees, as well as served as a member of the bipartisan Joint Committee on Deficit Reduction, where he worked across party lines to try and reduce the country’s debt and strengthen our economy. Prior to his departure from the Senate, Secretary Kerry was the seventh-most senior Senator.

Secretary Kerry was the Democratic Party's nominee for President of the United States in 2004.

Secretary Kerry is the author of best-selling books, including A Call to Service: My Vision for a Better America and This Moment on Earth, a book on the environment which he co-authored with his wife, Teresa Heinz Kerry. Together they are proud of a blended family that includes two daughters, three sons, and three grandchildren.