James Madison was appointed Secretary of State by President Thomas Jefferson on March 5, 1801. He entered duty on May 2, 1801, and served until March 3, 1809. He had already made invaluable contributions to the establishment of the federal government before starting a long career in diplomacy. 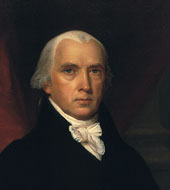 Madison was born in Port Conway, Virginia and raised on the Virginia frontier in Orange County. He graduated from the College of New Jersey (now Princeton University) in 1771. By 1776 he was elected to the State Assembly and the Virginia Convention that declared independence from Great Britain. From 1778 to 1779 Madison sat on the State Executive Council. He was a member of the Second Continental Congress and the Congress of the Confederation. He served in the Virginia House of Delegates from 1784 to 1786, the Annapolis Convention of 1786, and the Federal Convention of 1787, where his "Virginia Plan" proposing the general outline of the U.S. federal government formed the basis of debate. During these debates, Madison, along with Alexander Hamilton and John Jay, penned the Federalist Papers hoping to secure the passage of the federal constitution. Madison was also a member of the Virginia Convention of 1788 that ratified the U.S. Constitution.

While serving as a member of the U.S. House of Representatives from 1789 to 1797, Madison sponsored the Bill of Rights. After growing disenchanted with Hamilton’s pro-British sentiments, Madison aligned with Thomas Jefferson to form the Democratic-Republican Party. After Jefferson won the 1800 presidential election, he appointed Madison Secretary of State. Madison would be the first Secretary of State to go on to serve two presidential terms. He began the first of his two presidential terms in 1809.

Madison’s foreign policies were guided by his republican ideals and his faith in the strength of the expanding U.S. economy. As Secretary of State, he cooperated closely with President Jefferson who kept close control over key decisions. Together they organized the negotiations with France that led to the 1803 Louisiana Purchase. Despite concerted effort, however, they could not convince the Spanish to sell West Florida.

As President, Madison annexed West Florida through intrigue and force in 1810. Madison also supported Jefferson’s decision to fight a naval war against the Barbary Pirates. The Napoleonic Wars presented a dire foreign policy challenge when both France and Britain began violating U.S. neutrality rights. Particularly disturbed by the British impressment of U.S. sailors, Jefferson and Madison sought to conclude a new treaty with Britain that would protect U.S. trading rights and ban impressment. Unable to achieve these concessions, they adopted a policy to pressure the European powers through economic restrictions.

A series of acts aimed to display foreign dependence on the U.S. economy followed, including the Embargo Act of 1807 and the Non-Intercourse Act of 1809. The restrictions spurred smuggling by U.S. merchants, failed to sway European policies, and disrupted U.S. trade, especially when European powers reciprocated with trade limitations. Madison’s struggle to stop British violations of U.S. neutrality culminated after his election to the Presidency when the two nations entered the War of 1812. Madison’s hopes to gain Canadian territory through military victories were never realized due to the political stalemate that followed major losses on the battlefield.