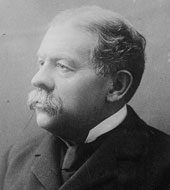 Olney was born on September 15, 1835, in Oxford, Massachusetts. He graduated from Brown University in 1856 and from Harvard Law School in 1858. Olney practiced law and was intermittently active in politics and the Democratic Party, serving a term in the Massachusetts State legislature in 1874. President Grover Cleveland appointed Olney as Attorney General in 1893.

Olney came to the Department of State at a time when a Cuban revolt against Spanish rule in Cuba was gaining strength. As the Spanish Government attempted to suppress the rebellion, Olney faced public pressure to intervene. The U.S. Government tried to halt shipments from Cuban sympathizers and exiles from Key West and other U.S. ports. Tensions over Cuba would eventually ignite the the year after Olney left office in 1898.

Olney played a significant role in mediating the between Venezuela and the British colony of Guyana. The dispute stemmed from the historically vague definition of the Venezuela-Guyana border, which had never been delineated during the colonial period.

In 1893, Venezuela publicly pressed its claims and hoped for arbitration. Hoping to secure assistance by invoking the , José Andrade, Venezuelan Minister to the United States, brought the issue to the U.S. Department of State, and President Cleveland mentioned the issue in his 1894 message to Congress.

In February of 1895, Congress passed a resolution favoring U.S. arbitration. Although his predecessor, Walter Gresham, was less interested in pursuing the issue, Olney believed it was important to enhance national prestige and to capitalize on U.S. popular resentment of British power. At issue was not British reluctance to arbitrate, but British refusal to accept Venezuelan border demands as a possible outcome of the arbitration.

Lord Salisbury decided that conciliation would be expedient and authorized British Ambassador to the United States, Julian Pauncefote, to negotiate an arbitration treaty. Olney and Pauncefote signed a treaty on February 2, 1897, which subjected the Venezuela-Guyana border to U.S. arbitration, allowing full Venezuelan claims to be considered in the arbitration process. The resulting arbitration, decided in October of 1899, awarded territory to Venezuela.

Olney left office at the end of Cleveland’s second administration, and resumed practicing law, although he continued to write about international relations. In 1904, Olney was a candidate for the Democratic nomination for President. He declined the Ambassadorship to Great Britain in 1914, citing his age. Olney died on April 8, 1917.