Biographies of the Secretaries of State: Timothy Pickering (1745–1829) 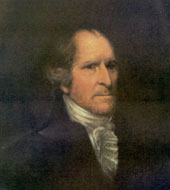 Born in Salem, Massachusetts, Pickering graduated from Harvard College in 1763 and received a Master of Arts degree in 1766. After studying law, he joined the Massachusetts bar in 1768.

Pickering entered the Revolutionary Army as a Colonel in 1775 and was elected to the Massachusetts legislature the next year. In 1777 he was appointed Adjutant General and the Continental Congress elected him as a member of the Board of War. He served as Quarter-Master General of the Army from 1780 until 1784.

After the war, Pickering moved to Pennsylvania and represented Luzerne County in the 1787 convention that ratified the Federal Constitution and in the state Constitutional Convention (1789-1790).

Pickering received a federal appointment as Postmaster General in 1791, which lasted until 1795. His Federalist credentials helped him gain appointment as Secretary of War in January 1795.

Before appointing him Secretary of State, President Washington sent Pickering on special missions during the 1790s to negotiate with the Northeastern Indian tribes and to dissuade them from allying with Northwestern tribes. Pickering signed the 1794 Treaty of Canandaigua with the Iroquois League, a confederacy of six nations. In the agreement, the U.S. Government recognized the League's sovereignty over a sizable territory within New York State and offered payments, including an annual allowance, in exchange for a peace agreement and the right of passage through Iroquois Territory for U.S. citizens.

Pickering became Secretary of State in a controversial manner, and controversy would characterize his tenure. He manipulated an end to the tenure of his predecessor, Edmund Randolph, largely because of Randolph’s opposition to the 1794 Jay Treaty. Pickering produced a slanted translation of French documents that had been intercepted by the British Navy and informed President Washington that they proved Randolph’s traitorous behavior.

Once appointed as Secretary of State, Pickering followed a pro-British agenda and did not share Presidents Washington’s and Adams’ qualms about political entanglements with warring European powers. The ratification of the Jay Treaty worsened U.S.-French relations due to its preferential treatment of Great Britain. France’s hostile reaction to the treaty—including the decision not to receive a U.S. Minister and the seizure of U.S. merchant ships caught trading with Britain—encouraged Pickering’s pro-British stance. He opposed Adams’ decision to send a delegation to negotiate with France. The XYZ Affair (1797-1798) propelled Pickering’s desire to ally with Great Britain in a full-scale war with France.

When Adams reopened negotiations with France late in 1798 seeking to end the Quasi-War with France, Pickering stepped up his protests. He conspired to place pro-British Alexander Hamilton as a Major General in the Army, hoping to establish a large permanent army. Pickering also attempted to hinder Adams’ efforts to explore options for peace with France. Pickering’s public attacks on the President eventually drove Adams to request his resignation. Pickering refused to resign and was subsequently dismissed by Adams.