Biographies of the Secretaries of State: George Pratt Shultz (1920–2021)

George Shultz was named as Secretary of State by President Ronald Reagan on June 25, 1982. Following confirmation by the Senate, he assumed the office of Secretary on July 16, and he remained in that position until January 20, 1989. 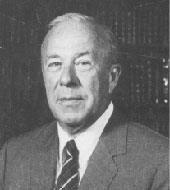 Born and raised in New York City, Shultz completed his undergraduate studies at Princeton University in 1942. After serving with the United States Marine Corps Reserves in the Pacific theater during World War II, he pursued a Ph.D. in industrial economics at the Massachusetts Institute of Technology, receiving his degree in 1949. From then until 1968, he taught economics at MIT and the University of Chicago.

As Secretary of State, Shultz played a crucial role in guiding U.S. diplomacy during his lengthy six and a half year tenure in office. Upon his confirmation, he inherited a number of foreign policy challenges, including war in Lebanon, delicate negotiations with the People’s Republic of China and the Government on Taiwan, and a ratcheting up of Cold War tensions with the Soviet Union.

Over the next several years, Shultz focused U.S. diplomatic efforts on resolving the conflict in the Middle East, defusing trade disputes with Japan, managing increasingly tense relationships with several Latin American nations, and crafting U.S. responses to the rise of Mikhail Gorbachev and the new Soviet policies of perestroika and opening to the West.

In part due to his collegial relationships with President Reagan and other members of the Administration, Shultz was able to exert considerable influence over U.S. foreign policy in regards to these issues. Although he was unable to forge a lasting resolution to the Middle East conflict, he negotiated an agreement between Israel and Lebanon and convinced Israel to begin withdrawing its troops in January 1985, in spite of Lebanon’s contravention of the settlement.

He completed the discussions between the United States and China, begun under Secretary of State Alexander Haig, which led to the joint communiqué of August 1982 that has provided stability for U.S.-Chinese relations ever since.

Shultz had not been able to halt the arms-for-hostages deals with Iran that provided funds for the Contras in Nicaragua, which he had opposed, but by 1988 he had helped to broker agreements that eased the disputes of Nicaragua’s civil war.

He had other successes in Latin America, but his crowning achievements came in regards to U.S.-Soviet relations. Through positive responses to the overtures of Gorbachev and his Foreign Minister, Eduard Shevardnadze, and through his own initiatives, Shultz helped to draft and sign landmark arms control treaties and other agreements that helped to diminish U.S.-Soviet antagonism.

As a result, under Shultz’s leadership, U.S. diplomacy helped to pave the way for the ending of the Cold War during 1989.