Biographies of the Secretaries of State: Edward Reilly Stettinius Jr. (1900–1949)

Edward Reilly Stettinius, Jr. served as Secretary of State from December 1, 1944, until June 27, 1945, under Presidents Franklin Delano Roosevelt and Harry S. Truman. As Secretary of State, he oversaw the end of the Second World War in Europe and the creation of the United Nations. 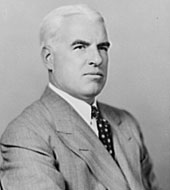 Stettinius was born in Chicago on October 22, 1900. Stettinius graduated from the Pomfret School in 1920 before beginning his coursework at the University of Virginia. He left Virginia in 1924 without receiving a degree and two years later became the assistant to General Motors’ Vice-President John Lee Pratt.

Stettinius took over Pratt’s position in 1931 and came to know Franklin Delano Roosevelt through his work developing unemployment relief programs. After leaving General Motors in 1934, he worked for the United States Steel Corporation until 1940, becoming Chairman of the board of directors in 1938.

He undertook the crucial roles of Director of Lend-Lease aid and Special Assistant to the President in 1941, positions which he held until becoming Under Secretary of State in 1943.

Following Secretary of State Cordell Hull’s retirement due to health issues, Stettinius became Secretary on December 1, 1944, and served in that position until June 27, 1945. After his government career concluded, he became the Rector of the University of Virginia, a position he held until his death on October 31, 1949.

Stettinius came to the position of Secretary of State with a great deal of foreign policy experience. His roles in war production and national defense and his work as chief Lend-Lease administrator and Special Assistant to the President had prepared him for the challenges of being chief diplomat.

As Secretary of State, Stettinius accompanied President Roosevelt to the Yalta Conference in February of 1945, where they met with British Prime Minister Winston Churchill and Soviet Premier Joseph Stalin to discuss issues such as the Pacific War with Japan, the future political status of Eastern Europe, and what should be done with Germany following its surrender.

He resigned his position as Secretary of State on June 27, 1945, to become the first U.S. Ambassador to the United Nations, a post which he held until resigning in June 1946 over what he saw as President Truman’s refusal to use the United Nations forum to resolve growing Soviet-American tensions.

Stettinius continued his interest in international issues after his resignation as U.S. Ambassador to the United Nations by heading the Liberia Company, which partnered U.S. financiers with the Liberian Government to provide funds for Liberia’s development.