Biographies of the Secretaries of State: Daniel Webster (1782–1852)

Webster was appointed Secretary of State by President William Henry Harrison on March 5, 1841. He entered duty the next day and completed his tenure on May 8, 1843, during the administration of President John Tyler.

Webster returned to the position when he was appointed by President Millard Fillmore on July 22, 1850. Webster officially entered duty as Secretary of State for his second tenure on July 23, 1850, and left the position on October 24, 1852.

During his two tenures as Secretary of State, Webster focused his considerable legal talents on strengthening the U.S. Government and expanding foreign trade. 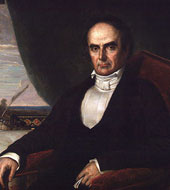 Webster was born into a family of frontier farmers in Salisbury, New Hampshire. He graduated from Dartmouth College in 1801, began teaching school and studying law, and joined the Massachusetts bar in 1805.

Webster practiced law for several years in New Hampshire before winning political office in 1813. He served as a Representative from New Hampshire until 1817. Webster’s gift for law and oratory made him an influential attorney, and he became involved in a number of landmark Supreme Court cases.

Webster’s major task during his first appointment as Secretary of State was to negotiate a number of longstanding disputes with Great Britain. He helped achieve the landmark Anglo-American Webster-Ashburton Treaty of 1842. The treaty settled the Maine boundary, increased U.S. involvement in suppressing the African slave trade, and included an extradition clause that would become a model for future treaties. The agreement also ushered in an era of rapprochement between the two nations, allowing the U.S. Government to focus on westward expansion.

Webster extended diplomatic protection to U.S. missionaries abroad, and he arrogated the Monroe Doctrine to the Hawaiian Islands.

He resigned from the Secretaryship in 1843 due to financial difficulties and a disagreement with President Tyler over the annexation of Texas, a move stridently opposed by Webster.

After President Fillmore brought Webster back as Secretary of State in 1850, Webster dedicated significant attention to domestic affairs such as the Compromise of 1850 and the Fugitive Slave Law.

Undiplomatically, he created a rift with the Austrian Empire with his so-called Hülseman note (named for J.G. Hülseman the Austrian Chargé to the United States). Webster intended to explain U.S. support for Hungarian independence, but his note starkly criticized European monarchism.

In somewhat of a contrast, he later defended the Spanish Crown’s right to protect its Cuban colony against U.S. filibustering expeditions.

Webster continued to take steps toward improving Anglo-American relations. He successfully advised the British Government to cede its protectorates and some geographical claims in Central America. However, he found no success with the Mexican Government, which blocked the U.S.-backed construction of a railway across the Isthmus of Tehuantepec.

Webster died while serving as Secretary of State and working on a number of prescient matters, including the drive to expand U.S. trade in Asia.