The policy struggle in Washington further intensified when a new Soviet leader, Mikhail Gorbachev, emerged in March 1985. In order to restructure the Soviet economy and reform domestic society, Gorbachev needed to reduce military spending at home and political tensions abroad. His goal was a fundamental change in the relationship between the superpowers and his method was arms control agreements. Shultz encouraged Reagan to develop a personal relationship with Gorbachev. Reagan and Gorbachev held four summit meetings between November 1985 and May 1988 in Geneva, Reykjavik, Washington, and Moscow. 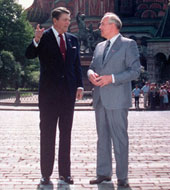 Their personal relationship produced its most practical result in December 1987, when the two leaders signed the Intermediate Range Nuclear Forces (INF) Treaty. The treaty, which eliminated an entire class of missiles in Europe, was a milestone in the history of the Cold War. Although Gorbachev took the initiative, Reagan was well prepared to adopt a policy of negotiations. Shultz and the Department of State played a key role in this diplomatic approach.