At the end of the war, the Soviet Union was a closed society under the iron grip of Joseph Stalin. 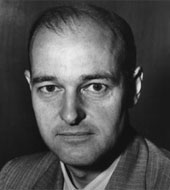 Few in the West had experience with the communist state and even fewer understood what motivated the Soviets. One man who had first hand knowledge was a Foreign Service officer, George F. Kennan. In 1946, while he was Chargé d’Affaires in Moscow, Kennan sent an 8,000-word telegram to the Department—the now-famous “long telegram”—on the aggressive nature of Stalin’s foreign policy. Kennan, writing as “Mr. X,” published an outline of his philosophy in the prestigious journal Foreign Affairs in 1947. His conclusion was that “the main element of any United States policy toward the Soviet Union must be that of a long-term patient but firm and vigilant containment of Russian expansive tendencies.” Containment provided a conceptual framework for a series of successful initiatives undertaken from 1947 to 1950 to blunt Soviet expansion.