1898: The Birth of a Superpower - Short History - Department History

The global equilibrium, which had allowed the United States to grow and prosper in virtual isolation since 1815 was gone forever as the result of a short but shattering war. In 1898, U.S. domestic support for the independence of Cuba enmeshed the United States in a struggle with Spain over the fate of the island nation. The decision to aid the Cuban resistance was a major departure from the traditional American practice of liberal nationalism, and the results of that decision had far-reaching consequences. The 1898 Treaty of Paris ending the war gave Cuba its independence and also ceded important Spanish possessions to the United States—notably Puerto Rico, the Philippines, and the small island of Guam. The United States was suddenly a colonial power with overseas dependencies. 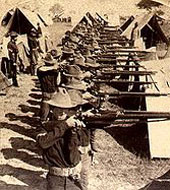 This assumption of colonial responsibilities reflected not only the temporary enthusiasms of 1898 but also marked a profound change in the diplomatic posture of the United States. The foreign policies of the early 19th century had less relevance at the dawn of the 20th century because the nation had changed. The United States had almost all the attributes of a great power—it stood ahead or nearly ahead of almost all other countries in terms of population, geographic size and location on two oceans, economic resources, and military potential.

Foreign policy had to change to meet these new circumstances. President William McKinley drew attention to the new situation in the instructions he gave to the delegation of American statesmen who negotiated the Treaty of Paris. “We cannot be unmindful that without any desire or design on our part the war has brought us new duties and responsibilities which we must meet and discharge as becomes a great nation on whose growth and career from the beginning the Ruler of Nations has plainly written the high command and pledge of civilization.”

Another contemporary observer, George L. Rives, extended this interpretation. “Whether we like it or not,” he wrote, “it is plain that the country is now entering into a period in its history in which it will necessarily be brought into far closer and more complex relations with all the other great Powers of the world,” an outcome that would leave established foreign policy outmoded. “We shall now and henceforth be looked upon as having cast aside our traditional attitude of isolation.”