The First World War greatly affected the international position of the United States because it shattered the general global stability that had cocooned the nation for almost 100 years. Political isolation, however appropriate during the 19th century, no longer served the national interest, and the country was pulled into foreign entanglements unthinkable just a few years earlier. 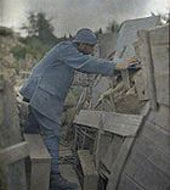 Soldier during World War One

When war broke out in 1914 between the Allied Powers (Great Britain, France, Russia, Japan, and later Italy) and the Central Powers (Germany, Austria-Hungary, and Turkey), the United States announced a policy of strict neutrality in keeping with tradition. This position was untenable when American shipping came under repeated attack from German U-boats.

During the period of American neutrality (1914-1917), attitudes toward international affairs born in the wake of the Spanish-American War blossomed. As its global interests expanded, United States found itself in conflict with another rising power—Germany. Ironically, American interests were frequently aligned with those of an old enemy, Great Britain. The war exacerbated the trend, and a tense diplomatic conflict with Germany over the legality of unrestricted submarine warfare against neutral shipping simply accelerated a political process that had begun some years earlier.