An Outburst of Pamphlets: Public Debate about FRUS during the Civil War
- Research - History of the Foreign Relations Series - Historical Documents

An Outburst of Pamphlets: Public Debate about FRUS during the Civil War

By Aaron W. Marrs
Office of the Historian, U.S. Department of State

In a research paper posted to this site on June 24, 2011, I wrote about the domestic reaction to the first Foreign Relations (FRUS) volume [text and video] published in 1861. That paper focused primarily on the positive reaction of Northern newspapers. Tracking coverage of the first FRUS volume in the press allows us to see how FRUS was received throughout the Union. Historians have other options for learning about public reaction. In 1863, a brief flurry of pamphlets sprung up after the publication of the FRUS volume covering 1862. In these pamphlets, we can see contemporaries debate the propriety of publishing state papers. 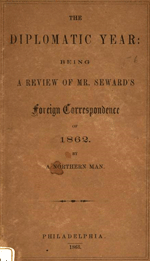 Cover of The Diplomatic Year: Being a Review of Mr. Seward’s Foreign Correspondence of 1862 (Photo credit Google Books)

The first to take on FRUS in that year gave himself the pen name “A Northern Man” (although one of his opponents revealed his identity, as we’ll see below). His pamphlet was entitled The Diplomatic Year: Being a Review of Mr. Seward’s Foreign Correspondence of 1862.1 The Diplomatic Year had many targets, from President Abraham Lincoln and Secretary of State William Henry Seward to the very concept of publishing diplomatic correspondence.

The anonymous author argued that FRUS was the result of mere political intrigue. In 1862, Samuel Sullivan Cox (D-Ohio) submitted a call for the release of documents. A Northern Man charged that, though Cox was a Democrat, he was “closer in affinities to the Secretary than some of his party friends, or certainly than the Chairman of the Senate Committee.” Thus, A Northern Man averred, such a resolution never would have been offered up unless there had been a “prompting” by or “concurrence of” the Department of State; the request for the documentation did not truly stem from Congress.2

A Northern Man also denounced the contents of the published volume. Seward’s writing was blasted as lacking a “dignity of style,” as being “pretentious,” “stilted,” and “obscure.” A Northern Man was deeply disturbed that the volume contained “Mr. Adams’s private movements and conversations in relation to the French operations in Mexico, and his exultation at the disappointments which seemed to attend them.”  He stated that a series of documents relating to the Spanish and French “ought not, unless offence was intended or foreign war desired—to have been authoritatively published.”3 These and other revelations, feared A Northern Man, would cause “irreparable” harm.4

A Northern Man’s screed prompted at least two equally anonymous responses. One, entitled A Diplomat on Diplomacy, castigated A Northern Man’s writing as “ponderous” and scoffed that the pamphlet has “not attracted attention adequate to the industry with which it has been circulated.”5 The author outed A Northern Man as “the late distinguished Commissioner to the most imperial court of China.” Based on this description, it can be surmised that A Northern Man was William Bradford Reed, President James Buchanan’s representative to China. Reed’s anonymous opponent had little use for the complaints that Reed made about publication, noting that “even in China,” Reed should have learned that “the publication of a diplomatic correspondence may be highly improper at one period of time, and eminently proper at another.”6 In sum, this author believed that the Secretary of State and President could be trusted to determine if the publication of confidential documents would serve national interests rather than jeopardize them.

The other response was the pseudonymous Dr. Syntax, Jr.’s A New “Sartor Resartus,” Being a Critical Analysis of a Pamphlet Entitled “A Review of Mr. Seward’s Diplomacy.” 7 Dr. Syntax presumably published his pamphlet after A Diplomat on Diplomacy, for he noted that The Diplomatic Year “has already been reviewed, and that not in the kindest spirit.” Dr. Syntax agreed that the author was Reed, noting that the pamphlet was “universally attributed to a prominent member of the Philadelphia Bar; who was charged with an important foreign mission, under the late Administration, and who has ever since been supposed to enjoy the especial confidence of its Chief.”8

It is not clear if the implication should be that Buchanan himself approved of the pamphlet, or merely that such a connection afforded Reed’s opinions more respect than he might otherwise deserve. Dr. Syntax spent most of his pamphlet on, as his name suggests, Reed’s language, picking apart his grammatical errors. Dr. Syntax felt that the political opinions expressed in FRUS needed no defense since they were lauded elsewhere.9 The author noted that the United States was hardly alone in publishing correspondence.10 Britain produced its Blue Book of diplomatic correspondence, as Dr. Syntax reminded his audience, and under the Buchanan administration a “ponderous volume of Chinese dispatches was published; unveiling many delicate secrets.” Dr. Syntax concluded, much as the anonymous author of A Diplomat on Diplomacy did, by arguing that it was the role of “principals,” be they a merchant instructing a clerk or the Secretary of State instructing a diplomat, to decide when interests “confided to these servants, will be best promoted by a publication of the previously confidential instructions under which they had acted.” He felt it was “sophistry” to argue that once “subordinate agents” were under an “injunction of secrecy” that those in charge of foreign affairs could never expose this information.11

What should we make over this outburst of pamphleteering in 1863? Reed’s motivations remain a mystery, although his Democratic politics may help explain part of his opposition to the Lincoln administration. Beyond partisan politics, his objections were that publication of documentation would harm U.S. interests abroad. As I explained in another post, Charles Francis Adams had similar concerns—which Seward dismissed. These pamphlets demonstrate that a similar debate played out in public, not just inside the government. Reed’s two opponents show us the other side of the debate: they pointed out that publication of documentation was routine and that the prerogative of releasing documents rightfully rested with the leaders of the government, not those who wrote the documents. While contemporary debates about the release over government documentation don’t usually have the same personal tone that A Northern Man’s attacks did, it is clear that issues such as striking a balance between openness and secrecy and determining who has the right to release information have a long history in this country.