The Constitutional Basis of FRUS

By Aaron W. Marrs
Office of the Historian, U.S. Department of State

In these blog posts, we have been sharing the fruits of our ongoing research into the history of the Foreign Relations of the United States series. As our investigation continues, our knowledge about the series grows and evolves. In this post, I’ll discuss how new findings shed light on some long-standing questions about the series.

One of the frustrating aspects of researching Civil War-era FRUS tomes is that documentation from the nineteenth century tells us very little about the actual mechanics of how the volumes were assembled. We don’t know much about how the documents were selected or who did the selecting (although, in my previous post I showed that we can learn something by looking at the material left out of the volume). The philosophical impetus behind releasing documentation has represented another gap in our knowledge. We’ve never known how fully involved Secretary of State William Henry Seward was in the creation of the series or what purpose he believed the series had (if any). 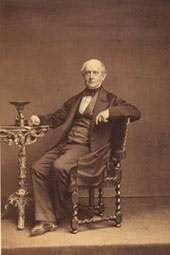 Recent sleuthing at the National Archives has uncovered more of the story, illuminating Seward’s ideas concerning the utility of releasing foreign relations documentation. (Hearty thanks are due to Forrest Barnum for conducting the original research and to David Langbart of the National Archives for generously providing the images of the original document.) In 1864, Seward defended the practice to his minister in London, Charles Francis Adams, and in so doing laid out some principles which undoubtedly guided the compilation of FRUS during the war years. Let’s take a look at the documents.

On February 11, 1864, Adams complained to Seward about the publication of his correspondence in a previous year’s edition of FRUS (see the full text of Adams’s despatch). Adams noted that “the publication of the diplomatic papers … has elicited much comment in Parliament and in the newspapers,” and attached a clipping from the The Times (London) which described debates in the House of Lords and House of Commons. Adams expressed his disappointment that “when you decided on publishing those instructions, you did not at the same time” publish another despatch which would have made his actions more understandable to the British. Because of the uneven publication of the record, Adams contended, he was now perceived by the British government to have “suppress[ed]” information back in 1863.

Seward responded on March 2, 1864. His response was not published in FRUS, but can be found in manuscript form (see here for the transcript and PDF scan) at the National Archives in College Park, Maryland.1 Seward quickly dispensed with Adams’s complaint, particularly since Adams himself admitted in his despatch that no “particular injury” had resulted from the publication of the documentation. Seward then embarked on a lengthy defense of the publication of diplomatic correspondence. Since this document constitutes what little evidence we have of the administration’s intent, I think that it is worth quoting at some length here. Here’s how Seward began his defense of the publication:

“The Constitution of the United States requires the President, from time to time, to give to Congress information concerning the state of the Union. In the beginning of our government a practice obtained according to which the President communicated this information on the assembling of Congress in a full and comprehensive annual speech or message, to which are appended all the important reports and documents which have been placed by the Heads of Departments before the President as the sources and evidences of the information to be by him submitted to Congress. It is hardly necessary to say that the interest of Congress and of the people of the United States in the transactions of the Executive Department, always earnest, became intensified with the breaking out of the civil war.”

For Seward, then, informing Congress had a Constitutional basis. Seward was referring to Article II, Section 3, which states that the President shall “from time to time give to the Congress Information of the State of the Union.” Clearly, Seward understood providing information to Congress to be a duty rather than an option; that responsibility had only intensified during the Civil War. Seward then noted that the President considered it to be “more satisfactory” to fulfill this obligation “with all possible fullness at the beginning of each meeting of Congress, rather than to await their special calls for it in particular cases.” As I have noted elsewhere in this article and video, Congress requested and received diplomatic documentation since the earliest years of the republic. Now, however, Lincoln felt it was appropriate to supply the information without waiting to be asked by Congress.

Seward noted that in a democracy, the people deserve to have information since they are the source of the government’s power:

“The Government constantly depends on the support of Congress and the People, and that support can be expected only on the condition of keeping them thoroughly and truthfully informed of the manner in which the powers derived from them are executed. Mutual confidence between the People and the Government is a condition of our national life.”

Seward then turned from an explanation of why materials could be excluded from FRUS (and thus, why the materials Adams was worried about should be included). Speaking again of Congress, Seward wrote:

“They had the same right to see my dispatch to you of the 11th of July, 1863, that they had to see any other parts of the Executive correspondence concerning foreign affairs. This history would be incomplete without that document. It was the President’s duty to communicate it, unless special reasons of a public nature existed for withholding it. Only two such special reasons could be allowed, namely, one, that the publication would be incompatible with the public interests by affecting a friendly negotiation on an existing question. But the question which had called out the dispatch had been for a time put at rest; and mutually satisfactory explanations between the two Governments had been made. The other reason was that the publication might give offence to Great Britain. But the document was a communication from this Government not to Her Majesty’s Government, but to its own agent; and the paper was believed to be as respectful to the British Government as it manifestly was earnest and sincere. On the other hand, to withhold so important a portion of the Executive correspondence would have seemed to imply a confession that it was improper in itself, while to practice reserve on so great a question would be liable to be deemed an abuse of the confidence which Congress and the people had so freely reposed in the Government.”

Here, Seward made clear that there were only two reasons for excluding material: if it was affecting negotiations or would give offense to another power. In the course of the entire response, Seward set out the complete case of why it was important to release the documentation. The President had a Constitutional obligation to communicate with Congress. The American people, through their Congress, had the right to be informed since the power of the government was derived from the people. There were very few reasons why documents deserved to be excluded from publication. Indeed, the exclusion of documents could itself raise questions about the reliability of the government.

As we know from my past post, material was sometimes excluded for what appeared to be very different reasons (such as pointing out the embarrassment of Union defeat at Bull Run). Nevertheless, Seward’s statement to Adams in 1864 presents a strong case for what the administration believed it accomplished with the release of these volumes. The need for transparency was explicitly linked to our form of government and the obligations created by the Constitution which the Union was fighting so hard to preserve.

Read the text of Seward's statement to Adams, or download the PDF, 1 MB, 9 pp.