Following the defeat Spain in the Spanish-American War of 1898, the United States acquired overseas colonies in the Caribbean and the Pacific. In its new status as an imperial power, the United States pursued a series of policies designed to protect American territories and aggressively expand its international commercial interests. 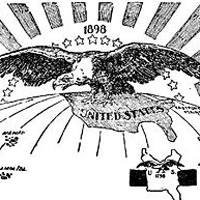 These policies included the promotion of the “Open Door” policy in China and the attachment of the Roosevelt Corollary to the Monroe Doctrine that formally announced the intention to use military force to defend the Western Hemisphere against European incursions. At the same time, President Theodore Roosevelt oversaw the construction of the Panama Canal, which would have profound economic implications for American trade, and engaged in great power diplomacy in the wake of the Russo-Japanese War. In just over a decade, the United States had redefined its national and international interests to include a large overseas military presence, overseas possessions, and direct engagement in setting priorities in international affairs.