The immediate cause of the United States’ entry into World War I in April 1917 was the German announcement of unrestricted submarine warfare and the subsequent sinking of ships with U.S. citizens on board. But President Woodrow Wilson’s war aims went beyond the defense of U.S. maritime interests. In his War Message to Congress, President Wilson declared that the U.S. objective was “to vindicate the principles of peace and justice in the life of the world.” 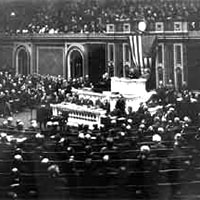 In several speeches earlier in the year, President Wilson sketched out his vision of an end to the war that would bring a “just and secure peace,” not merely “a new balance of power.” He then appointed a committee of experts known as The Inquiry to help him refine his ideas for peace. In December 1917, he asked The Inquiry to draw up specific recommendations for a comprehensive peace settlement. Using these recommendations, Wilson presented a program of fourteen points to a joint session of Congress on January 8, 1918. Eight of the fourteen points treated specific territorial issues among the combatant nations. Five of the other six concerned general principles for a peaceful world: open covenants (i.e. treaties or agreements) openly arrived at; freedom of the seas; free trade; reduction of armaments; and adjustment of colonial claims based on the principles of self-determination. The fourteenth point proposed what was to become the League of Nations to guarantee the “political independence and territorial integrity [of] great and small states alike.”

Though Wilson’s idealism pervades the Fourteen Points, he also had more practical objectives in mind. He hoped to keep Russia in the war by convincing the Bolsheviks that they would receive a better peace from the Allies, to bolster Allied morale, and to undermine German war support. The address was immediately hailed in the United States and Allied nations, and even by Bolshevik leader Vladimir Lenin, as a landmark of enlightenment in international relations. Wilson subsequently used the Fourteen Points as the basis for negotiating the Treaty of Versailles that ended the war. Although the Treaty did not fully realize Wilson’s unselfish vision, the Fourteen Points still stand as the most powerful expression of the idealist strain in United States diplomacy.