On April 2, 1917, President Woodrow Wilson went before a joint session of Congress to request a declaration of war against Germany. Wilson cited Germany’s violation of its pledge to suspend unrestricted submarine warfare in the North Atlantic and the Mediterranean, as well as its attempts to entice Mexico into an alliance against the United States, as his reasons for declaring war. On April 4, 1917, the U.S. Senate voted in support of the measure to declare war on Germany. The House concurred two days later. The United States later declared war on German ally Austria-Hungary on December 7, 1917. 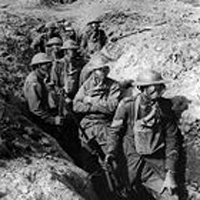 World War I Trenches in France

Germany’s resumption of submarine attacks on passenger and merchant ships in 1917 became the primary motivation behind Wilson’s decision to lead the United States into World War I. Following the sinking of an unarmed French boat, the Sussex, in the English Channel in March 1916, Wilson threatened to sever diplomatic relations with Germany unless the German Government refrained from attacking all passenger ships and allowed the crews of enemy merchant vessels to abandon their ships prior to any attack. On May 4, 1916, the German Government accepted these terms and conditions in what came to be known as the “Sussex pledge.”

By January 1917, however, the situation in Germany had changed. During a wartime conference that month, representatives from the German Navy convinced the military leadership and Kaiser Wilhelm II that a resumption of unrestricted submarine warfare could help defeat Great Britain within five months. German policymakers argued that they could violate the “Sussex pledge” since the United States could no longer be considered a neutral party after supplying munitions and financial assistance to the Allies. Germany also believed that the United States had jeopardized its neutrality by acquiescing to the Allied blockade of Germany.

German Chancellor Theobald von Bethmann-Hollweg protested this decision, believing that resuming submarine warfare would draw the United States into the war on behalf of the Allies. This, he argued, would lead to the defeat of Germany. Despite these warnings, the German Government decided to resume unrestricted submarine attacks on all Allied and neutral shipping within prescribed war zones, reckoning that German submarines would end the war long before the first U.S. troopships landed in Europe. Accordingly, on January 31, 1917, German Ambassador to the United States Count Johann von Bernstorff presented U.S. Secretary of State Robert Lansing a note declaring Germany’s intention to restart unrestricted submarine warfare the following day. 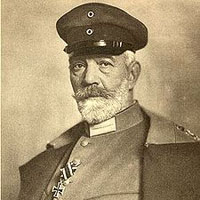 Stunned by the news, President Wilson went before Congress on February 3 to announce that he had severed diplomatic relations with Germany. However, he refrained from asking for a declaration of war because he doubted that the U.S. public would support him unless he provided ample proof that Germany intended to attack U.S. ships without warning. Wilson left open the possibility of negotiating with Germany if its submarines refrained from attacking U.S. shipping. Nevertheless, throughout February and March 1917, German submarines targeted and sank several U.S. ships, resulting in the deaths of numerous U.S. seamen and citizens.

On February 26, Wilson asked Congress for the authority to arm U.S. merchant ships with U.S. naval personnel and equipment. While the measure would probably have passed in a vote, several anti-war Senators led a successful filibuster that consumed the remainder of the congressional session. As a result of this setback, President Wilson decided to arm U.S. merchant ships by executive order, citing an old anti-piracy law that gave him the authority to do so.

While Wilson weighed his options regarding the submarine issue, he also had to address the question of Germany’s attempts to cement a secret alliance with Mexico. On January 19, 1917, British naval intelligence intercepted and decrypted a telegram sent by German Foreign Minister Arthur Zimmermann to the German Ambassador in Mexico City. The “Zimmermann Telegram” promised the Mexican Government that Germany would help Mexico recover the territory it had ceded to the United States following the Mexican-American War. In return for this assistance, Germany asked for Mexican support in the war. 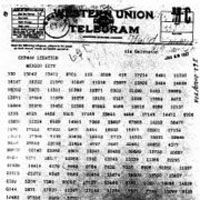 Initially, the British had not shared the news of the Zimmermann Telegram with U.S. officials because they did not want the Germans to discover that British code breakers had cracked the German code. However, following Germany’s resumption of unrestricted submarine warfare in February, the British decided to use the note to help sway U.S. official and public opinion in favor of joining the war. The British finally forwarded the intercepted telegram to President Wilson on February 24. The U.S. press carried the story the following week.

Despite the shocking news of the Zimmermann Telegram, Wilson still hesitated asking for a declaration of war. He waited until March 20 before convening a Cabinet meeting to broach the matter—almost a month after he had first seen the telegram. The precise reasons for Wilson’s decision to choose war in 1917 remain the subject of debate among historians, especially in light of his efforts to avoid war in 1915 after the sinking of the British passenger liners Lusitania and Arabic, which had led to the deaths of 131 U.S. citizens.

However, by 1917, the continued submarine attacks on U.S. merchant and passenger ships, and the “Zimmermann Telegram’s” implied threat of a German attack on the United States, swayed U.S. public opinion in support of a declaration of war. Furthermore, international law stipulated that the placing of U.S. naval personnel on civilian ships to protect them from German submarines already constituted an act of war against Germany. Finally, the Germans, by their actions, had demonstrated that they had no interest in seeking a peaceful end to the conflict. These reasons all contributed to President Wilson’s decision to ask Congress for a declaration of war against Germany. They also encouraged Congress to grant Wilson’s request and formally declare war on Germany.