From 1981 onward, the Reagan administration feared that conflict between Lebanese factions backed by Syria and Israel, along with clashes between Israel and the Palestine Liberation Organization (PLO), could escalate into an Arab-Israeli war. Yet American policymakers differed over how to prevent such a conflict, especially over whether to commit troops for that purpose. Following Israel’s 1982 invasion of Lebanon, the advocates of military intervention won out. But by 1984, terrorist attacks, a lack of diplomatic progress, and congressional opposition led President Ronald Reagan to withdraw U.S. forces from Lebanon. 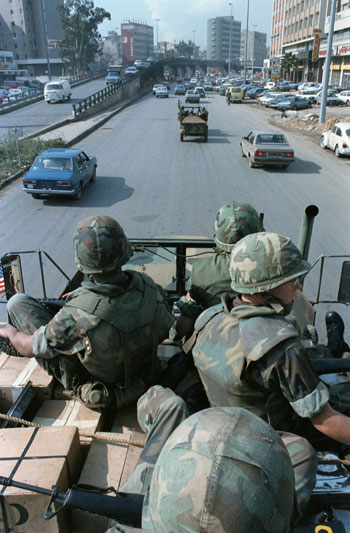 U.S. Marines on patrol in Beirut, April 1983. (Department of Defense)

In April 1981, the Israeli Air Force attacked Syrian forces in Lebanon to prevent them from seizing the strategic Sannin ridge. Syria responded by deploying surface-to-air missiles into the Biqa‘ Valley, threatening Israel’s ability to monitor PLO forces in Lebanon. To avert war, Reagan sent emissary Philip Habib to the Middle East, but he failed to persuade the Syrians to withdraw the missiles. When fighting escalated between Israel and the PLO that July, the Reagan administration feared that Israel would invade Lebanon. Ultimately, Habib managed to negotiate a de facto ceasefire between Israel and the PLO.

The ceasefire, however, merely postponed a larger crisis. The Lebanese remained at odds, Syria refused to withdraw its missiles, and Israel chafed under the restrictions of the ceasefire, which allowed the PLO to strengthen itself and did not prevent terrorist attacks from the West Bank and Gaza Strip or against Israeli and Jewish targets in Europe. In London on June 3, 1982, Palestinian assailants shot Shlomo Argov, Israel’s ambassador to the United Kingdom. The Israel Defense Forces (IDF) invaded Lebanon on June 6.

The Reagan administration was divided over how to respond to Israel’s invasion. Secretary of State Alexander Haig argued that the United States should not pressure Israel to withdraw without demanding that the PLO and Syria do likewise. Secretary of Defense Caspar Weinberger, Vice President George Bush, and National Security Advisor William Clark wanted the IDF to withdraw immediately and to sanction Israel if they did not. The debate sharpened when the IDF destroyed Syria’s missiles in the Biqa‘ on June 9, raising the specter of a wider war. President Reagan sent Habib to Israel to demand a ceasefire. The IDF halted its advance into the Biqa‘ but continued to the outskirts of PLO-controlled West Beirut.

With the Israeli-Syrian confrontation defused, Reagan adopted Haig’s strategy of helping the Lebanese Government take over West Beirut, then negotiating Israeli and Syrian withdrawal. By July, the PLO informed Habib that they would leave Beirut if an international force deployed to protect Palestinian civilians. Against Weinberger’s advice, Reagan agreed to contribute Marines to a multinational force (MNF), alongside French and Italian troops. However, the Palestinian withdrawal did not begin until August 21. The United States could not convince any Arab country to receive all PLO fighters from Beirut; they were ultimately dispersed to several states. Initially, the Israelis refused to let the MNF deploy until the PLO left, instead intensifying their attacks on Beirut. The PLO completed its withdrawal by September 1. Though the MNF was supposed to remain for thirty days, Weinberger announced that the Marines would leave on September 10.

On September 14, Lebanese President-elect Bashir Gemayel, whose election had been backed by the Israelis, was assassinated. Citing a need to prevent civil disorder, the IDF entered West Beirut. By September 18, it became clear that the Israelis had allowed Maronite militiamen to enter the Sabra and Shatilla camps and massacre Palestinian civilians. An international outcry ensued, and Reagan decided to commit Marines to a new MNF. On October 28, Reagan signed National Security Decision Directive (NSDD) 64, calling for the United States to work toward the withdrawal of foreign forces from Lebanon, help rebuild the Lebanese Army, and contribute to an expanded MNF if necessary. In April–May 1983, Secretary of State George Shultz helped Israel and Lebanon negotiate an agreement that ended the hostilities between the two countries and provided a basis for normal relations once Israel withdrew. For Israel to withdraw, however, Syrian and Palestinian forces would also need to leave Lebanon.

The Israeli-Lebanese agreement was opposed by Syrian President Hafiz al-Asad, who claimed that it would enable Israel to dominate Lebanon. Asad refused to remove his troops and encouraged Lebanese opposition to President Amin Gemayel. Meanwhile, the Israelis, facing guerilla attacks in the Shuf, decided that they would unilaterally withdraw from the area.

The Reagan administration feared that an Israeli pullback could lead to the partition of Lebanon and expose the MNF to shelling from the Shuf. New emissary Robert McFarlane attempted to soften Syria’s position, delay Israeli withdrawal, and help Gemayel and his opponents reconcile, but without success. The IDF pulled back on September 3, and fighting erupted between Maronite Lebanese Forces and pro-Syrian militias led by Walid Jumblatt’s Popular Socialist Party. To prevent Lebanese troops from intervening, Jumblatt and his allies attacked them as well, leading McFarlane to warn that they might reach Beirut and topple Gemayel’s government.

Reagan responded by authorizing the Marines to engage in “aggressive self-defense,” dispatching the battleship New Jerseyto Lebanon, and authorizing naval gunfire and airstrikes to prevent hostile forces from seizing Suq al-Gharb, which overlooked the Marine barracks. But by the time a ceasefire took hold on September 25, the fighting had provoked significant opposition to Reagan’s Lebanon policy. On September 29, Congress passed legislation invoking the War Powers Act and authorizing the Marines to remain in Lebanon for 18 months, the first time constraint placed on their presence. Weinberger now proposed withdrawing U.S. forces offshore.

On October 23, suicide bombers attacked the barracks of the U.S. and French contingents of the MNF, killing 241 American servicemen. The administration believed that the bombings, like the attack on the U.S. Embassy in Beirut that April, were perpetrated by Shi‘i militants linked to Syria’s ally Iran. Reagan responded by adopting a tough policy championed by Shultz and McFarlane, now National Security Advisor. On October 28, he signed NSDD 111, which called for broadening strategic cooperation with Israel and Arab opponents of Syria, reducing Syrian influence over Lebanon’s Druze and Shi‘a, and expanded rules of engagement regarding naval and air support for the Lebanese Army.

The implementation of NSDD 111, however, was marred by disagreements between Reagan’s advisors, Syrian intransigence, a lack of progress toward Lebanese reconciliation, and major public relations setbacks. Though Reagan publicly proclaimed that the perpetrators of the October 23 bombings “must be dealt justice,” U.S. forces did not join their French counterparts in attacking an Iranian Revolutionary Guards barrack in the Biqa‘ that November. McFarlane later contended that Reagan had authorized U.S. participation in the strikes, but Weinberger refused to follow through on his order. On December 4, the Syrians shot down two U.S. planes, and held one of the pilots, Lt. Robert Goodman, prisoner until releasing him to Democratic presidential candidate Jesse Jackson. Even more damaging to the administration’s prestige were press leaks regarding the Department of Defense’s Long Commission report, which harshly criticized the Marines’ deployment. On February 1, 1984, amidst mounting congressional criticism, Reagan approved the idea of redeploying the Marines but did not set a date for doing so. Almost immediately afterward, however, pro-Syrian militias overran West Beirut, and on February 7, Reagan announced that the Marines would withdraw offshore.

Reagan’s decision to withdraw the Marines remains controversial. Supporters argue that it did not make sense to sacrifice American lives and resources to help resolve a conflict where the parties involved showed little interest in working toward U.S. goals. Critics, however, claim that Reagan failed to stand firm against terrorism and demonstrated that the United States was an undependable ally.