Biographies of the Secretaries of State: Madeleine Korbel Albright (1937–2022)

Madeleine Korbel Albright was nominated to be the first woman Secretary of State by President William Jefferson Clinton on December 5, 1996, confirmed by the U.S. Senate on January 22, 1997, and sworn in the next day. She served in the position for four years and ended her service on January 20, 2001. 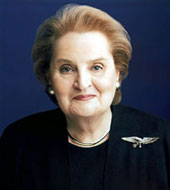 Albright was born Marie Jean “Madlenka” Korbel on May 15, 1937, in Prague, Czechoslovakia. Her father, Josef, was a member of the Czechoslovak Foreign Service and served as press attaché in Belgrade, Yugoslavia and later became Ambassador to Yugoslavia. After the communist coup in 1948, the family immigrated to Denver, Colorado. Albright Americanized her name to Madeleine, became a U.S. citizen in 1957, and earned a B.A. in political science with honors from Wellesley College in 1959. She earned the Ph.D. in Public Law and Government at Columbia University in 1976.

Albright served as chief legislative assistant to Senator Edmund Muskie (D-Me) from 1976 to 1978. From 1978 to 1981, she served as a staff member in the White House under President Jimmy Carter and on the National Security Council under National Security Adviser Zbigniew Brzezinski.

As Secretary of State, Albright promoted the expansion of NATO eastward into the former Soviet bloc nations and the non-proliferation of nuclear weapons from the former Soviet republics to rogue nations, successfully pressed for military intervention under NATO auspices during the humanitarian crisis in Kosovo in 1999, supported the expansion of free-market democratization and the creation of civil societies in the developing world, favored the ratification of the Kyoto Protocol on Global Climate Change, and furthered the normalization of relations with Vietnam.