President-elect Garfield named James G. Blaine, his former rival for the Republican presidential nomination, to his cabinet as Secretary of State. Blaine took office in 1881. As Secretary, Blaine continued his long interest in Latin America, “first, to bring about peace and prevent futile wars in North and South America; second, to cultivate such friendly commercial ties with all American countries as would lead to a large increase in the export trade of the United States.” 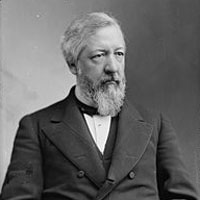 He sought exclusive U.S. control over any canal to be built in the Central American isthmus, a goal finally realized in the 1901 Hay-Pauncefote treaty with Great Britain. He sought to keep Hawaii as “part of the American System,” although Hawaii was not annexed until 1898. He tried and failed to resolve the 1879–1883 War of the Pacific between Chile, Peru and Bolivia. President Garfield’s assassination in July 1881 elevated Chester Arthur to the presidency, and since Arthur belonged to a different wing of the Republican party Blaine’s days in the cabinet were numbered. After Arthur canceled a planned Pan American Congress, Blaine resigned as Secretary of State in December 1881.

When Benjamin Harrison was elected President in 1888, he invited Blaine to become Secretary of State once again. In 1889, a Pan American Congress was finally convened in Washington. Blaine followed up by campaigning tirelessly for arbitration treaties with Latin American nations and for Congressional authority to negotiate trade agreements on the basis of reciprocity. Blaine’s “spirited foreign policy” also included settlement of a dispute with Germany and Great Britain over the Samoan Islands, long-running negotiations with Great Britain over the right of Canadian vessels to hunt seals in the Bering Sea, and resolution of serious disputes with Chile and Italy over the murder of American citizens. Blaine’s major accomplishment in his second tenure as Secretary was the promotion of closer political and commercial relations between the United States and the nations of Latin America. But even here these good feelings began to deteriorate with rising jingoism in the United States, which stirred latent Latin American suspicions of the “Colossus of the North.” Whether because of worsening relations with President Harrison, deteriorating health, or ambition to again secure the Republican nomination for the presidency, Blaine resigned in June 1892. James G. Blaine, “the man from Maine,” died in January 1893 at age 63.