Yellow journalism was a style of newspaper reporting that emphasized sensationalism over facts. During its heyday in the late 19th century it was one of many factors that helped push the United States and Spain into war in Cuba and the Philippines, leading to the acquisition of overseas territory by the United States. 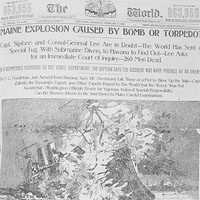 The term originated in the competition over the New York City newspaper market between major newspaper publishers Joseph Pulitzer and William Randolph Hearst. At first, yellow journalism had nothing to do with reporting, but instead derived from a popular cartoon strip about life in New York’s slums called Hogan’s Alley, drawn by Richard F. Outcault. Published in color by Pulitzer’s New York World, the comic’s most well-known character came to be known as the Yellow Kid, and his popularity accounted in no small part for a tremendous increase in sales of the World. In 1896, in an effort to boost sales of his New York Journal, Hearst hired Outcault away from Pulitzer, launching a fierce bidding war between the two publishers over the cartoonist. Hearst ultimately won this battle, but Pulitzer refused to give in and hired a new cartoonist to continue drawing the cartoon for his paper. This battle over the Yellow Kid and a greater market share gave rise to the term yellow journalism.

Once the term had been coined, it extended to the sensationalist style employed by the two publishers in their profit-driven coverage of world events, particularly developments in Cuba. Cuba had long been a Spanish colony and the revolutionary movement, which had been simmering on and off there for much of the 19th century, intensified during the 1890s. Many in the United States called upon Spain to withdraw from the island, and some even gave material support to the Cuban revolutionaries. Hearst and Pulitzer devoted more and more attention to the Cuban struggle for independence, at times accentuating the harshness of Spanish rule or the nobility of the revolutionaries, and occasionally printing rousing stories that proved to be false. This sort of coverage, complete with bold headlines and creative drawings of events, sold a lot of papers for both publishers.

The peak of yellow journalism, in terms of both intensity and influence, came in early 1898, when a U.S. battleship, the Maine, sunk in Havana harbor. The naval vessel had been sent there not long before in a display of U.S. power and, in conjunction with the planned visit of a Spanish ship to New York, an effort to defuse growing tensions between the United States and Spain. On the night of February 15, an explosion tore through the ship’s hull, and the Maine went down. Sober observers and an initial report by the colonial government of Cuba concluded that the explosion had occurred on board, but Hearst and Pulitzer, who had for several years been selling papers by fanning anti-Spanish public opinion in the United States, published rumors of plots to sink the ship. When a U.S. naval investigation later stated that the explosion had come from a mine in the harbor, the proponents of yellow journalism seized upon it and called for war. By early May, the Spanish-American War had begun.

The rise of yellow journalism helped to create a climate conducive to the outbreak of international conflict and the expansion of U.S. influence overseas, but it did not by itself cause the war. In spite of Hearst’s often quoted statement—“You furnish the pictures, I’ll provide the war!”—other factors played a greater role in leading to the outbreak of war. The papers did not create anti-Spanish sentiments out of thin air, nor did the publishers fabricate the events to which the U.S. public and politicians reacted so strongly. Moreover, influential figures such as Theodore Roosevelt led a drive for U.S. overseas expansion that had been gaining strength since the 1880s. Nevertheless, yellow journalism of this period is significant to the history of U.S. foreign relations in that its centrality to the history of the Spanish American War shows that the press had the power to capture the attention of a large readership and to influence public reaction to international events. The dramatic style of yellow journalism contributed to creating public support for the Spanish-American War, a war that would ultimately expand the global reach of the United States.