The same act of Congress of July 16, 1790 which made Philadelphia the interim seat of government from 1790 to 1800 also provided that, beginning on the first Monday in December 1800, the District of Columbia would be the permanent seat of government and that suitable buildings should be erected for the accommodation of Congress, the President, and the public offices of the government.1 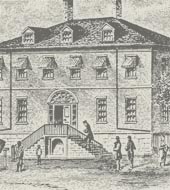 United States Treasury Building 1804
The date for moving was changed by an act of Congress approved on April 24, 1800,2 which authorized the President to direct the removal of the executive departments to the city of Washington at any time he might judge proper after the adjournment of the current session of Congress and prior to the convening of the next session.3

On May 15, 1800, just one day after Congress had adjourned in Philadelphia, President John Adams directed the department heads to move their offices and staffs to Washington as soon as it was convenient so that the public offices would be opened for business by June 15.4 All the executive departments made this move between May 15 and June 15 as the President had instructed. "The removal was not a stupendous task; ... the Government personnel consisted of only 126 persons."5

Secretary of the Treasury Wolcott described local conditions as he found them upon his arrival:

"There are few houses in any one place, and most of them small, miserable huts, which present an awful contrast to the public buildings....You may look in almost any direction, over an extent of ground nearly as large as the city of New York, without seeing a fence or any object except brick-kilns and temporary huts for laborers."6

On May 27 Charles Lee, Secretary of State ad interim, wrote from Philadelphia that the books and papers of the Department were packed for removal to Washington and that he would proceed there the following day.7 Certain Philadelphia newspapers of May 28, 1800,8 carried the following notice:

"The Office of the Department of State, will be removed this day from Philadelphia. All letters and applications are therefore to be addressed to that Department at the City of Washington, from this date.

Lee left Philadelphia on the morning of May 289 and arrived in Washington by May 31.10 By June 7 the Department of State was beginning to function in Washington,11

The Department stored some supplies not needed for current use in a building referred to as "Lear's Store"13—a large stone warehouse which had been erected by Colonel Tobias Lear, formerly President Washington's private secretary. Fronting on the Potomac, it was in the square bounded by Twenty-sixth, Twenty-seventh, F, and G Streets Northwest.14

The Treasury Department Building was one of two structures which were at this time intended to house the executive offices of the government. The other building had a corresponding location to the west of the White House, but was not ready for occupancy by June 1800. President Washington had determined the location for the two buildings in October 1796, and on March 3, 1797 he had approved the architect's plans for the buildings.15 George Hadfield was the architect.16

On May 7, 1798, the Commissioners for the District of Columbia had an advertisement inserted in the newspapers of Philadelphia, Baltimore, Georgetown, and Alexandria which read in part as follows:

"The Commissioners will receive proposals until the 20th of June next, for building in the City of Washington, one of the Executive Offices for the United States, of the following external dimensions-148 feet in length, and fifty seven feet six inches in breadth—cellar walls, 30- Inches—first story 23 Inches, and second story 18 Inches—partition walls averaging 15 Inches; to contain on the ground floor, 14 Rooms; same number on the second story, and in the Roof 8 Rooms, with a passage.—The whole external of the building to be of stock brick;—the inside walls of hard burnt brick—cellars of best foundation stone, to the height of the girders.—The outside walls as far as they shew above ground, to the plinth, to be of plain ashlar free stone—soles of windows, sills of doors, and string course of free-stone.—The house to be covered with cypress shingles—the rooms in general to be 16 feet by 20—finished in a plain neat manner, of the best materials—six small rooms to be groined.—"17

Of the various proposals submitted to the Commissioners in response to this advertisement, that of Leonard Harbaugh of Washington was accepted. On June 23, 1798, a contract was signed with Harbaugh for the erection of the building east of the White House at a cost of $39,511 and for its completion by July 1, 1800.18

During the course of the construction, a number of agreed changes were made from the original plans and specifications.19 For example, through an error on the part of the surveyor laying off the ground for the foundation, the length of the building was increased 7 1/2 or 8 feet over that shown on the original plans.20

The building, completed a few weeks ahead of schedule, was a plain two-story structure of brick on a freestone foundation, with abasement and a dormer-windowed attic. It appears that it was about 149 feet in length, east and west, and 57 1/2 feet wide. There were fourteen rooms on the first floor, fourteen on the second floor, and eight in the attic. Twenty-four of the rooms were 17 by 20 feet, eight were of nearly the same dimensions, and four were fireproof rooms of 10 by 12 feet.21

John Marshall was the first Secretary of State to have his office in Washington. He entered upon his duties on June 6, 1800. At the time, his staff consisted of the Chief Clerk, seven clerks, and one messenger.22