After approximately three months in the overcrowded Treasury Department Building, the Department of State moved into one of a block of houses known as the "Six Buildings " located on the north side of Pennsylvania Avenue between Twenty-first and Twenty-second Streets Northwest.1 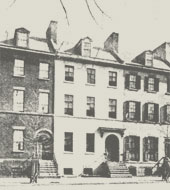 Section of the row of the "Six Buildings" on Pennsylvania Avene.
The exact building is not a matter of record. At the same time the Navy Department occupied another one of the Six Buildings;2 according to a biographer of the then Secretary of the Navy, this was building numbered 2107.3 The War Department occupied a three story house on the south side of Pennsylvania Avenue nearly opposite the Six Buildings until November 8, 1800, when the building, together with all the books and papers of the office of the Secretary of War, was destroyed by fire.4

It has frequently been asserted that the Department of State moved in 1800 into one of the so-called "Seven Buildings" rather than one of the Six Buildings. The Seven Buildings were a block of brick houses on the north side of Pennsylvania Avenue commencing at the corner of Nineteenth Street Northwest and extending westward.5 This assertion is erroneous since contemporary records of the Department of State refer specifically and repeatedly to its occupancy of one of the houses among the Six Buildings.6

The Six Buildings were erected sometime prior to May 15, 1800.7 Construction was begun by James Greenleaf, a speculator in Washington real estate, and was completed by Isaac Polock, to whom the property had been sold.8

Old photographs of the Six Buildings9 show a solid row of seven brick houses, each with three stories, a basement, and an attic, and all of similar though not identical architectural style. In front, each of the six houses had two windows to the left and a doorway to the right on the first floor, three windows on the second floor, and three smaller windows on the third floor. Each had a gable roof which sloped to the front and back, and each had a single dormer window in the front roof, except the house on the extreme right, which had two dormer windows. This house was not one of the original Six Buildings, but was erected later.

The numbers of the seven houses, when street numbers were assigned to [Page 28] 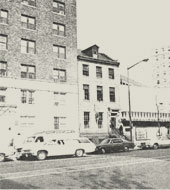 The Department of State moved to one of the Six Buildings sometime between August 27 and September 5, 1800. Forty-six cartloads of furniture, books, and other effects of the Department of State, including the models of inventions submitted to the Patent Office, which was then a part of the Department, were removed from the Treasury Department Building and from Lear's Store and taken to one of the Six Buildings. Included also was furniture belonging to the Department's messenger, which was moved from a house in Georgetown that the Department had rented for his use from June 6 to September 6, 1800. The Department purchased a set of bookshelves "for a library in the Secretary's room" and another set for the third story of the house, and had four large iron grates installed, evidently so coal could be burned in the fireplaces. On November 6, 1800, the Department paid the firm of Thompson & Veetch, of Alexandria, Va., $450 for nine months' rent for this house which included a kitchen and a coach house on the premises used by the Department as a stable and for coal storage.11

In this house, John Marshall completed his service as Secretary of State on March 4, 1801, when the Jefferson administration took charge. Marshall had already been appointed Chief Justice of the United States by President Adams, and for a short time he carried on the duties of both positions.

Attorney General Levi Lincoln then filled in as Secretary ad interim until James Madison entered upon his duties as Secretary on May 2, 1801. Madison had been commissioned on March 5, 1801, but his father had died in February and he was needed at home to attend to personal matters.

The Department was still quite small at this time. When Marshall resigned, there were only ten people on the staff, and the salaries totaled only $11,50012 The office of Chief Clerk had become quite important because he acted for the Secretary in his absence. The other employees recorded and copied the correspondence, collated the laws, recorded land patents, made out exequaturs for consuls, issued passports, issued patents, granted copyrights, and performed any other function given to the Department. The diplomatic service was also very small at this time, there being only five envoys who had the rank of minister.13